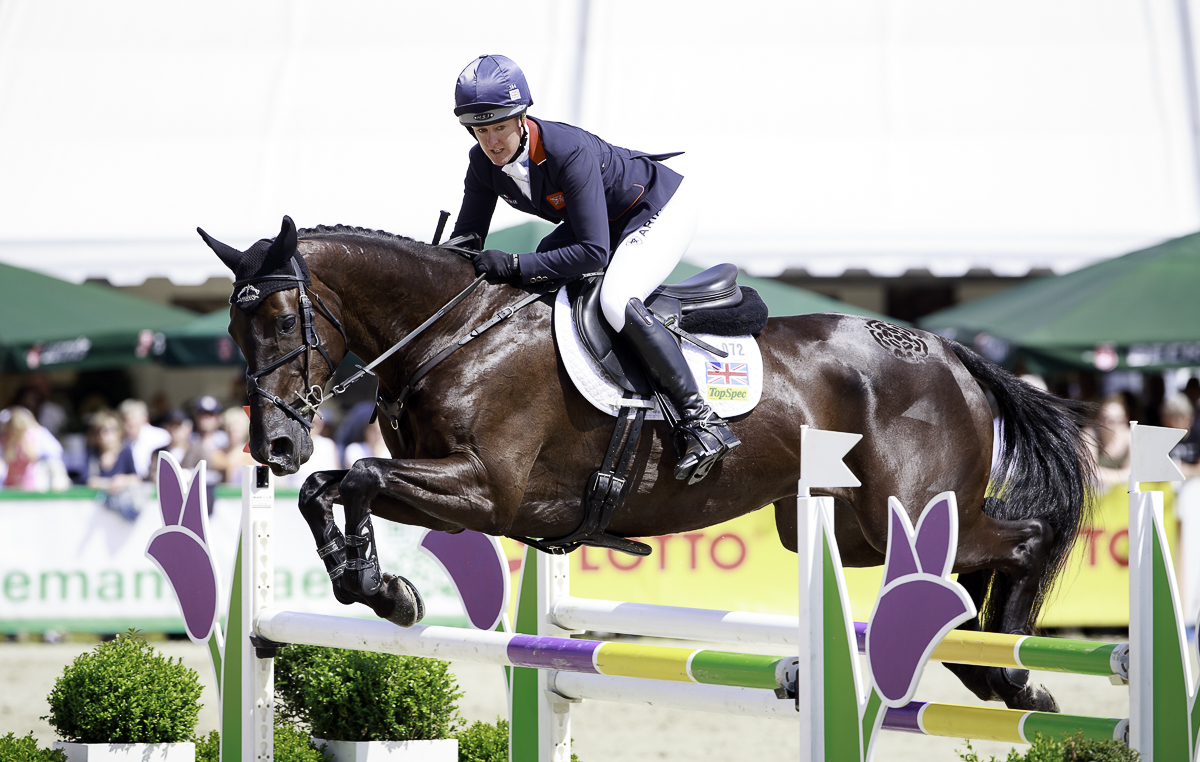 Britain’s Nicola Wilson moved up to second in the CCI4* at Luhmühlen, presented by DHL, in this afternoon’s final showjumping (18 June) with only her three time-faults preventing her from taking top spot.

Nicola piloted Jo and James Lambert’s Bulana to a clear jumping round over a tough track designed by Martin Otto, but the 88-second time allowed was also influential and she finished three seconds over it to add three penalties to her overnight score of 38.7 and complete on 41.7.

Rising German star Julia Krajewski’s mount Samourai Du Thot took the back rail off fence eight with his hindlegs to finish on 41.1, just 0.6 of a penalty ahead of Nicola.

Overnight leader Bettina Hoy therefore gained a fence in hand, but she looked tentative and Designer 10 hit the yellow upright at fence six. She cleared the rest of the fences, but it wasn’t enough — she too incurred three time-faults and dropped to third place, leaving Julia as the winner.

“The showjumping was really big — even bigger than last year,” said Julia. “My horse is quite small and I know he can jump everything, but I have to really ride him forwards, which was good as the time was tight. I didn’t worry too much about the time.

“If I hadn’t taken a pull he wouldn’t have hit fence eight as he didn’t want to touch a pole. After that, I thought ,’Damn’, but there were so few clear rounds and when Bettina had her fence and time-faults, that’s how it happens sometimes and you’re a four-star winner.”

There were only four fault-free rounds and one of these moved the USA’s Marilyn Little up from ninth to fourth with RF Scandalous. The other clears came from France’s Maxime Livio on Opium Des Verrierers (up from 11th to fifth), Australia’s Shane Rose with Virgil (up from 14th to seventh) and Britain’s Pippa Funnell on Billy The Biz (up from 20th to 10th).

Britain’s Sarah Bullimore went into this final phase in fourth with Lilly Corinne, but she dropped two places when she had the oxer at fence five and the middle part of the treble at fence seven down.

Oliver Townend sank from seventh to 18th with 20 jumping faults on Black Tie, but Britain had a fourth pair in the top 10 when Ros Canter’s five faults moved her and Zenshera up from 10th to ninth.

There was drama for Germany’s Andreas Dibowski, sixth overnight, when he appeared to get lost early in of his round and then FRH Butts Avedon crumpled right down to his knees in the treble at fence seven, blundering through the next element. Andreas, who won this class last year on It’s Me, then retired.

Full report from Luhmühlen in H&H next week, out Thursday, 22 June.