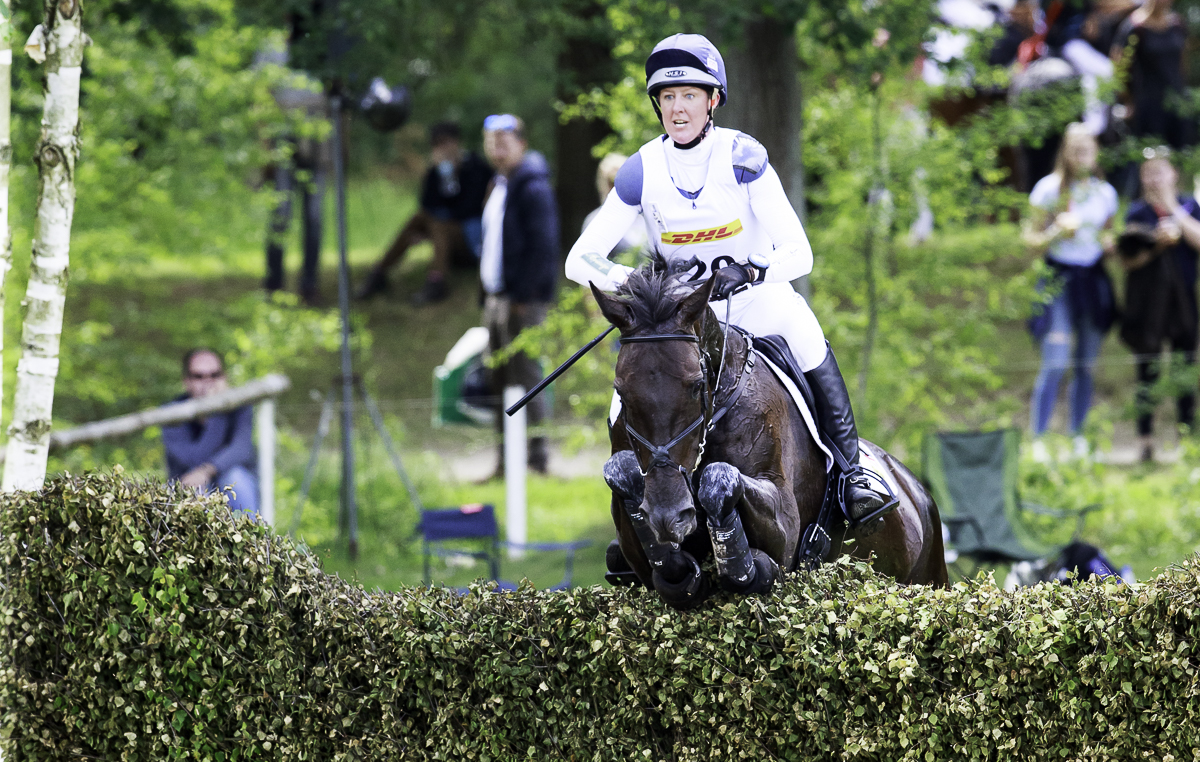 Britain’s Nicola Wilson has moved up to a podium position after cross-country day (17 June) at Luhmühlen CCI4*, presented by DHL.

Nicola, riding James and Jo Lambert’s Bulana, went clear inside the time over Mike Etherington-Smith’s track to rise from fourth after dressage.

“I’m just delighted — I love this horse, she’s got so much ability. In the past she’s been incredibly feisty and towed my arms out, but this time she gave me a lovely ride,” said Nicola.

Nicola Wilson and Bulana go clear inside the time across country at Luhmühlen 2017. Picture by Libby Law Photography

Germany’s Bettina Hoy retained pole position after also finishing fault-free, although she had a couple of risky moments early on when Designer 10 looked hesitant jumping into the first two water jumps at seven and eight.

“We were lucky to have Chris Bartle working with us for so long and he taught us the ‘Oh shit position’ — I could feel him leaving a leg and I just thought, ‘Oh shit, lean back’,” said Bettina.

Her compatriot Julia Krajewski was also clear inside the time on the lovely Samourai Du Thot to hold second.

“It was fun and Sam was absolutely amazing — he couldn’t have been any better,” said Julia. “My plan was to try to make the time as I felt Sam was fitter than last year and more mature, so I pushed from the beginning and I didn’t have one bad moment. I’m very happy and very proud of my horse.”

Although the course didn’t cause a great many problems and 17 pairs went clear inside the 11min 11sec optimum time, there were notable casualties at the top end of the leaderboard.

The USA’s Marilyn Little and RF Scandalous, third after dressage, incurred 6.8 time-faults and dropped to ninth. They were initially judged to have missed the white flag at the triple brush arrowhead at fence 24 and so incurred 50 penalties to drop completely out of the running, but the penalties were later removed.

Frenchman Astier Nicolas, fifth overnight, fell off when Molakai lost his footing in the third water and left his rider sitting on the triple brush arrowhead (fence 19ab).

Only one Brit did not finish the course — Emma Hyslop-Webb, who was unable to make the tight turn back to the corner at fence 9ab, overshot the corner and so ran out with Pennlands Douglas, who then ran-out twice more in the same place. The long route at this fence became popular as the day wore on.

Check back for more from Luhmühlen tomorrow, plus full report in H&H next week, out Thursday, 22 June.