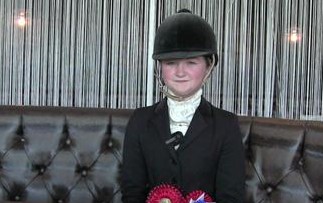 It was an excellent Thursday for Georgia Darlington and Tynwydd Good Friday, who were victorious in the Mountain & Moorland Working Hunter Pony title at Horse of the Year Show (HOYS) for the first time.

“I never expected to win” said an emotional Georgia, who competes the “all-round, fun pony” in cross-country and regularly takes her hunting.

After four years with the Darlington family, Welsh section C ‘Smartie’ has been sold and will go to her new home at the end of the season. Having won at the Royal International Horse Show this season, Georgia admitted it was “quite cool to have done the double”.

This title was the last feather in Smartie’s cap, after wins in most major championship shows during her career with Georgia. In her former home, Smartie was a successful showjumper, which undoubtedly stood her in good stead for this morning’s course.

“The course was trickier and bigger than last year, and quite spooky,” explained Georgia, “but Smartie knows her job, and a spooky track keeps her awake”. The 133cm pony won from 16 combinations in her section this morning.

Having qualified for HOYS at South of England, Smartie has also taken titles at the Ponies UK Summer Championships and the Pony of the Year show this term. “This was the highlight” added Georgia, “the lap of honour was amazing and over too quickly”.

Georgia, 16, and Smartie will be back in the main arena on Sunday to compete for the supreme ridden pony title alongside all the other ridden pony champions at the show. Georgia is looking to just have fun in the supreme, as it will be one of her last rides on the 12-year-old by Tynwydd Cardi.

Reserve champion was the 122cm winner, Chetwynd Caspar ridden by Charlie Oakes, a Welsh Section A owned and bred by the Countess of Shrewsbury. A thrilled Charlie gave a fabulous lap of honour for the crowd, with the 16-year-old gelding Caspar belying his years with a great gallop around the atmospheric arena here in Birmingham’s NEC.

Don’t miss the full report from Horse of the Year Show in next week’s Horse & Hound, on sale 15 October.