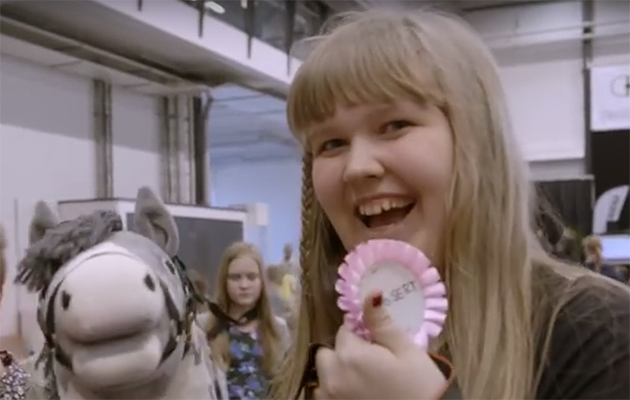 A group of Finnish teenagers has sparked a viral hobbyhorse riding craze that has attracted global attention.

Hobbyhorses have long been a toy box staple among horse-mad children — whether you had your own pony as a child or it was a tightly-held dream, the hobbyhorse was an essential.

A stick, some string mane and a double-helping of imagination are all that is needed to transport a child from Badminton, to the Grand National to the Olympic dressage arena.

But the hobby is now gaining popularity among older age groups too.

Finland has become the epicentre for the pastime, recently holding the hobbyhorse World Championships where it has been reported more than 1,000 people came to watch.

Here are 16 reasons why those who lead an equine-free

Noisy eaters, the bossy know-it-all and a stampede for the

Oscar award-nominated director Selma Vilhunen has shone the spotlight on the craze in her documentary Hobbyhorse Revolution, which was released on 31 March by Tuffi Films.

With a focus on friendship, community and the power of the imagination, the documentary follows three young girls whose lives have been changed by their new interest.

“It is good exercise, you learn handicraft skills when making hobbyhorses, co-ordination when you are riding dressage and you get to be with your friends,” explain teens Roosa and Elsa.

Described as “a funny and moving film about teenagers with growing pains, who discover their own voice and talent through riding and making hobbyhorses”, it scooped two awards at the Tampere Film Festival in Finland.

The heading on the film’s webpage encourages people to “never stop doing what you love”.

“[This is a] refreshing look at the coming of age of young women who transformed their passion into an empowering tool and created a community to stand up to the world,” said a statement from Tampere Film Festival’s jury on the documentary makers’ website.

“Through their conviction, love and special revolution, they invite us all to find our very own hobbyhorses.”

The trailer (top) has been viewed more than 244,000 times and the final word goes to Aiska: “Life has its ups and downs – this hasn’t been the easiest time in my life, but I just gotta jump over it!”