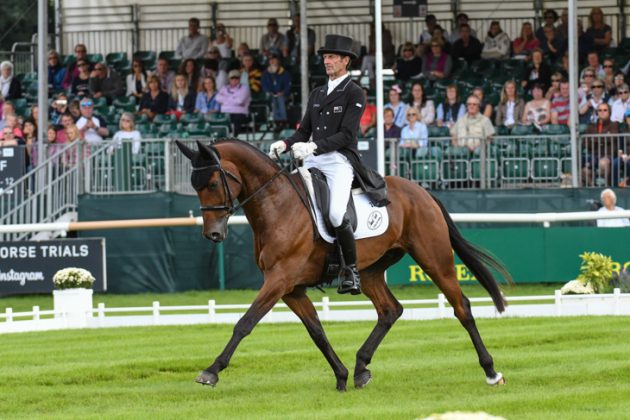 Mark Todd was the first rider to perform after the lunch break on the second and final day of dressage today (1 September) at the Land Rover Burghley Horse Trials, and he got things underway with a bang taking the lead riding Leonidas II. The New Zealand rider has managed to hold onto that lead as the final few competitors tried to better his score going into the cross-country tomorrow.

“I’m very pleased. I’ve always known he’s had the ability to do a test like that, but he can be fractious in the arena,” explained Mark. “He’s been improving all year and I felt that everything went absolutely smoothly in there today.”

Mark scored 36.7 and it has set him up nicely for the weekend.

“I haven’t won here this century,” he joked, referring to the fact his last win came in 1999 aboard Diamond Hall Red. “I joked with someone who asked how Leonidas II was going earlier this morning that he brought tears to my eyes, and he nearly did coming out of that arena.”

The USA’s Lauren Kieffer now sits in second after her good test on Veronica this morning that earnt her a mark of 37 and Michael Jung is in third with La Biosthetique – Sam FBW who scored 38.9 yesterday. Andrew Nicholson and Nereo are fourth while best of the Brits is Tina Cook and Calvino, who are fifth on 39.6.

“I’m really, really pleased with him — he’s a super little horse who is developing all the time,” said Tina. “He’s got the heart of a lion and I hoped he would do a good test as he has improved so much this year. I’ve not done many sub-40 tests so it’s quite nice!”

Oliver Townend is very excited about the 10-year-old Ballaghmor Class, who produced a good test for a mark of 40.2 and sixth place currently.

“He’s a young horse to be here and is still weak and babyish, but he’s possibly one of the best horses I’ve had,” said Oliver. “His performance today was right up there with my expectations, but I would have forgiven him if he made baby mistakes.”

Another impressive performance this afternoon was British first-timer Olivia Craddock who rode a solid test on Billy Liffy to hold 10th place on 45.4.

“I’m still shaking — he’s amazing,” smiled Olivia after her test. “Ian Woodhead trains us and he’s transformed my horse and my self-confidence. It’s unbelievable and hopefully just the start of the future. My mum sadly died four years ago and it was always our dream to get to Burghley so I hope I’ve made her proud.”

The cross-country gets underway tomorrow at 11.30am.