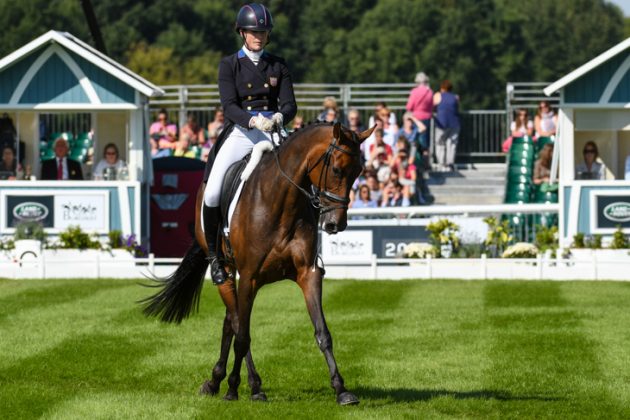 Lauren Kieffer, who is tackling her first ever Land Rover Burghley Horse Trials, has taken the lead in the dressage ahead of the final afternoon session of the first phase today (1 September). The 30-year-old from the USA scored 37 with Tam Rebecca Farm LLC’s Veronica.

“She’s such a pro now,” said Lauren of the 15-year-old mare. “She loves to work and I’m so lucky to have her. She knows what a competition is and wants to be on the trailer going out. We’ve struggled with the canter and walk work in our dressage before but I was really happy with both of them today. It’s all about just giving her the right aids and being on the same page in the ring.”

Thursday’s dressage leader, Michael Jung, now slips to second with La Biosthetique – Sam FBW on 38.9, while Andrew Nicholson has gone into third on his 2017 Badminton winner Nereo. The pair scored 39.5.

“Nereo is lovely to ride — he knows what he’s got to do and I can rely on him to go in there and do his job,” said Andrew of the 17-year-old. “He doesn’t go like this at home, but then I don’t ask him to — we just go through the motions and I trust him that he will come out and perform.”

Gemma Tattersall and Arctic Soul, who performed their test yesterday, now sit in fourth on 43, while Piggy French and Vanir Kamira have gone into fifth on 43.7.

“She can be different every day I ride her,” said Piggy of the 12-year-old mare owned by Trevor Dickens. “She was good working yesterday and then this morning I thought she perhaps wasn’t so good. She’s a funny little mare who goes hot and cold on you but she tries and tries. I’m delighted with how calm she was today and there’s still more to come which is so exciting.”

The USA’s Lynn Symansky is in sixth with Donner and the third best-placed Brit is Izzy Taylor who sits in seventh with Trevidden on a score of 45.6.

“I’m so pleased with him,” said Izzy of the 12-year-old. “Dressage is tricky for him but he really tried his hardest and remained with me.”

The final session of dressage gets under way at 2.30pm today.