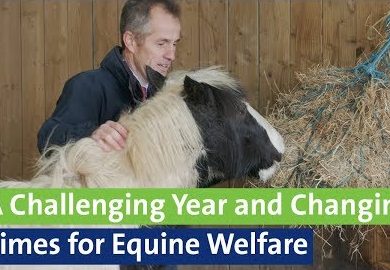 The charity’s chief executive, Roly Owers, gave the warning as part of his 2018 end of year message.

“Here in the UK we had the Beast from the East back in March, which hit on multiple occasions and then the severe drought conditions over the summer, which collectively sent calls to our welfare lines spiralling,” he said.

He added while these calls have receded, there are growing concerns going into the winter with the cost of bedding and forage

“This will certainly put us under extra pressure as we head into the winter with our centers nearly full.”

Mr Owers added this adds to the importance of people considering rehoming and said the charity hopes to rehome a record number of more than 300 equines by the end of the year.

“In these changing times we recognise the increasing challenge of having youngsters in our centre,” he said.

“This year alone we have 29, 12 of whom have been born from welfare cases that need taking in.

“As we face this ever growing pressure on our centres, it makes the case for rehoming ever-more important.

“Every one rehomed means we will be able to help another horse in desperate need.”

He also highlighted the ongoing international work and how the charity is grasping opportunities wherever possible to promote equine welfare to governments.

“We live in times of huge political uncertainty, not only with Brexit, but also with the forthcoming elections across the European Union,” said Mr Owers.

“What is also a huge benefit is we have an opportunity now that we really are taking advantage of, of promoting the cause of equine welfare to government and it is having real results with your help.

“This year alone we have new legislation around the licensing of equine establishments, the requirement for all abattoirs to have CCTV, the updating of the code of practice for equines and in England at least new equine identification legislation.”

‘There are those who pamper their animals, over-feed them treats, keep them in stables all day and pile rugs on

The charity’s campaign over transport of horses for slaughter has resulted in a reduction from 50,000 to 30,000 annually.

“But of course we will not rest until that number is reduced to zero, which is why it is so important we keep up the pressure through our latest petition to the European Commission and I urge you to sign that and get your friends, family and colleagues to sign that,” said Mr Owers.

“We know this kind of pressure really does have an inflience on bringing new and better regulation to the fore.

“The need for World Horse Welfare increases every year — we can only do what we do with your support and together we really are making a profound difference for thousands of horses, ponies, donkeys and mules around the world.”