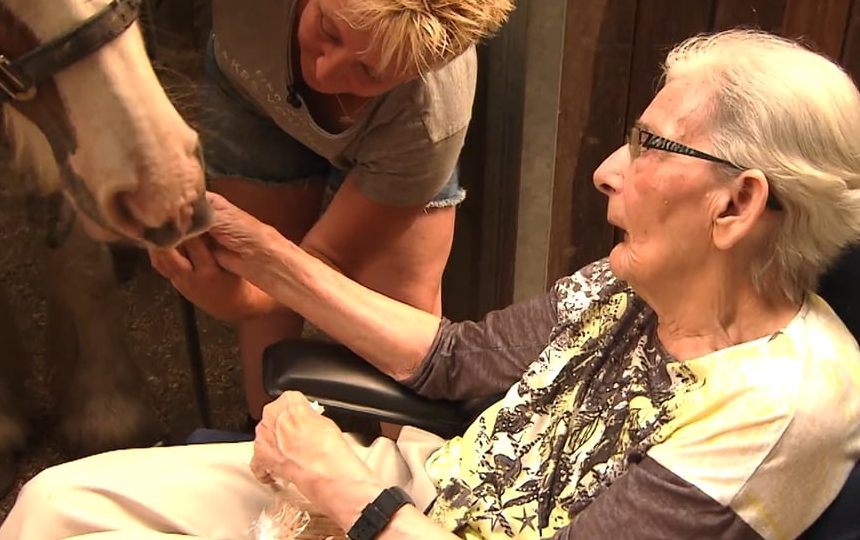 A touching video of an elderly lady enjoying her final ride has gone viral.

Mrs Jacobs, whose life used to “revolve around horses”, now suffers from Parkinson’s disease. She told staff at her nursing home in the Netherlands that her wish would be to ride one last time.

With the help of care group De Zorggroep and company Groene Kruis’s “Verborgen Verlangens” (make a wish) project, the 87-year-old was given the chance to ride again.

The clip, which was first published online three weeks ago, has since been watched more than 70,000 times.

“Usually she sits in a wheelchair all day long,” said Ruud Joosten, a nurse at De Zorggroep. “Her illness makes it difficult for her to communicate with others.

“Her wish was to ride a horse. It took her some time to tell us because it is so close to her heart.”

Mrs Jacobs was taken to De Huif Riding School, where she was introduced to some of the resident equines before being placed onto a special stretcher between two horses and carried around the indoor arena.

She described the feeling as “wonderful”.

Her son, Jan Jacobs, said that horses have been important to her ever since she was a child.

“This is a very emotional day for her, so she won’t be able to speak, but I can tell she loved every second of seeing the horses and smelling the stables,” he said.

“These things matter to her because she must have missed it at the nursing home.

“Lots of memories are coming back to her — her whole life revolved around horses.

“So through this experience, she is able to feel the joy again and reminisce about things from her past.”