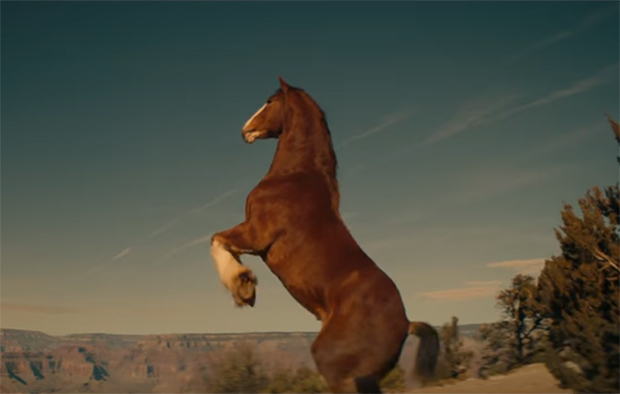 The wait is over for the new Budweiser advert featuring the company’s iconic Clydesdale horses.

The latest ad will not be shown in its usual Super Bowl slot, but was released online on Tuesday (30 January).

Titled “Beer Country”, the clip will run on television after the Super Bowl (4 February) but was released beforehand on social media.

“The Clydesdales are, and always will be, a big part of Budweiser’s history,” Ricardo Marques, Budweiser’s vice-president of marketing, told US press.

“They’re not only part of our family, but our fans’ too. And each year we hear the request for more Clydesdales, so we created this special film to honour them.”

While the Clydesdales might not be staring in this year's Budweiser Super Bowl advert, there is still a treat available

The heavy horses are filmed in a variety of locations, in urban and rural settings, showing landmarks including the Lincoln Memorial and the Brooklyn Bridge.

It ends with a Clydesdale galloping along a Californian beach, and another rearing alongside the Grand Canyon.

The Budweiser advert that will run during this year’s Super Bowl is about the company’s programme providing clean drinking water for communities hit by natural disasters.

History of the Budweiser Clydesdales

Originally used for pulling heavy cargo, the Clydesdale was brought to North America in the mid-19th century.

The Budweiser Clydesdales made their first public appearance in 1933 and since then they have featured in two presidential inaugurations. They appeared in Harry Truman’s inaugural parade in 1949, and then again for Bill Clinton in 1993.

The beer brand’s Super Bowl adverts have featured Clydesdales for the past 30 years.

Budweiser’s 2013 advert “Brotherhood” was voted the greatest Super Bowl ad of all time.

The advert, which shows the bond between a breeder and a Clydesdale, came out on top according to US TV channel CBS’ viewers.