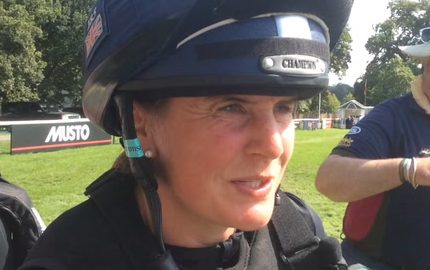 The pair, who were runners-up here last year, posted the fastest round of the day so far, finishing just three seconds over the optimum time of 11min11sec.

“She’s a fab little mare and I think you could strap a monkey to her and she’d go round,” laughed Piggy, who now sits on a score of 31.1. “You do have to keep her balanced though as naturally she likes to run on her head, but she’s such a game little girl. I’m now kicking myself that I was three seconds over. She was off the bridle at the Trout Hatchery, but I filled her up with air at the top of the hill after the Cottesmore Leap and she flew home.”

Fellow Brit Harry Meade sits on the same score as Piggy, but he was one second slower across country so is in second, riding Away Cruising.

“He tried so hard for me,” said Harry of his big grey. “I didn’t think he would stay the trip as well as he did, therefore I was a bit conservative with what I asked from him. But it’s better to be that way round rather than finishing with less fuel in the tank.”

Sarah Bullimore completes the British one-two-three, riding Reve Du Rouet. They were 19 seconds over the optimum time and are on a score of 34.9.

“I just needed to be a little bit quicker,” rued Sarah. “I lost time in a couple of places — he has such a big jump and was slightly distracted by the crowd, so I had to be careful. But he was fabulous and he is unbelievably scopey.”

Andrew Nicholson put in a great round on Jet Set IV, collecting 2.4 time-penalties to finish on a score of 36.2.

“My round felt a bit rugged and he pulled quite hard — he’s never seen crowds like this before and he was a bit brave and naïve,” explained Andrew, who sits in fourth place at the moment. “I was amazed that halfway round I was up on time. I then purposefully gave him a breather up Winners’ Avenue.”

Oliver Townend and MHS King Joules added 10.4 time-faults to their 27.2 dressage to move down from third to fifth at the moment.

“The course walked huge and rode bigger,” said Oliver, who has two more rides to come this afternoon. “It’s stamina-sapping out there and this horse is tricky enough to ride — he’s the strongest I’ve ever ridden and he pulled hard for the first three minutes. But he tried for me and I couldn’t be happier.”

Read the full report from cross-country day at Burghley at the end of the phase later this afternoon on horseandhound.co.uk