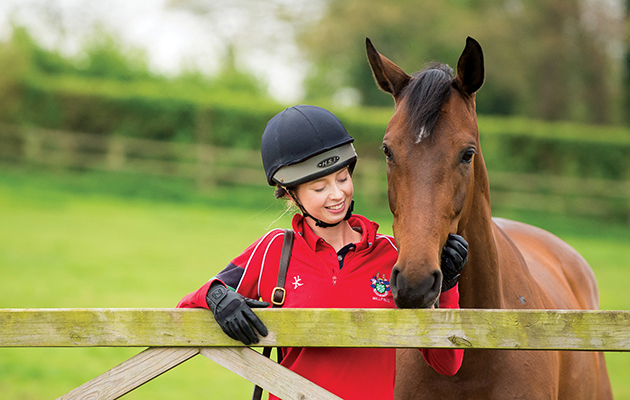 The British Horse Society (BHS) has launched a revitalised qualification scheme that aims to offer a more practical assessment process.

The “equine excellence pathway” was launched yesterday (17 July) and will cater for all those involved with horses — from individuals who want to become a professional groom, rider, or coach, to leisure riders and those looking to form a foundation for an equestrian career.

Changes to the qualification scheme include replacing the previous titles, for instance a BHSAI will now be known as a BHS stage three coach in complete horsemanship.

Qualifications will also become more flexible, so those who only want to teach dressage, for example, no longer have to jump from stage three upwards.

“It is not a revolution, it is about us modernising our system and making sure that every skill we provide relates to employability, making sure that people are ready and fit for the industry, no matter the role they do.

“What will remain at the heart of everything that the BHS does is the welfare of the horse and that’s what sets our system apart from every other system in the world.”

The new qualification system has an emphasis on a candidate’s practical application of skills.

“Not only can people talk about how to do something, but can they demonstrate it?” said Mr Copeland.

“Every single employer will know that those people coming through the system are ready [for work] because they have been assessed in a practical way.

“There are no classrooms and no writing within the first few stages of the qualifications because we want to see practical skills and make sure they can drive the industry forward.”

Part of the new scheme is the Ride Safe Award, which will be the entry level to the other stages.

The award aims to improve safety riders and horses in all areas, including on the roads and on bridleways as well as in the school.

“You have to congratulate the BHS for bringing things forward,” he said.

“The present system is very good and this initiative has taken the whole thing to another level. There are so many different pathways and routes to go down.

“It’s important you have the correct certificates, because people like to know you know what you are doing.”

Yogi stressed the importance of qualifications for equestrian coaches.

He cited a discussion he had at a BHS AGM with a man who said that he did not need an instructor with a training qualification to teach his children to ride.

“I asked him, ‘If your child needed to go to the dentist, would you take him to anyone or would you make sure it was someone who was qualified?’” said Yogi.

“The man said, ‘Of course I would take him to someone who was qualified’. I replied, ‘The difference between a bad dentist and a bad coach is that you only lose your teeth if you go to a bad dentist, but you can lose your life when you ride a horse’.

“Coaches need to be certified in the right sort of way — not just for their knowledge and horsemanship, but to create an enjoyable, interesting and safe environment.

“When it comes to coaching it’s about getting inside an individual’s brain. This new system is introducing more of a psychological side to coaching.

“It is understanding how one can shape good habits. If we look after a horse well, his life will be easier and if we ride him in a better way, the horse will have a much better life.”

Sabrina Jones, BHS chairman of exams and training, was on the committee who developed the new system.

“The syllabus is not really different, the main difference is the way it will be assessed,” she said.

“Up until now, five or six candidates would answer theory questions and one gives an answer, then another and when they come round to the sixth candidate they have nothing left to say.

“You would do the practical with different assessors so there is never a rapport between the candidates and the people assessing.

“Now you have an assessor for the whole day, with three candidates per assessor, and candidates will be assessed on a one-to-one basis.”

Ms Jones explained that candidates will be asked theory questions while carrying out practical tasks.

There has been a 29% increase in accidents

Yogi Breisner talks us through how to ride

Read the key points raised by a teaching

“For example on a stage one assessment, when grooming the horse, candidates will be asked to pick out a horse’s feet and tell the assessor about the parts of the foot and how they would recognise signs the horse needs shoeing.

“Everything is done with the horse in a much more practical way. Hopefully it will be much more user-friendly and assessors will get a much better idea of the level of the person they are assessing.”

Ms Jones added that the new titles of the qualifications — stage one, the lowest level, through to five, the stage before fellowship, which is the highest BHS qualification — were far easier to understand.

“People didn’t understand what our assessments meant before — it’s now easy,” she added.