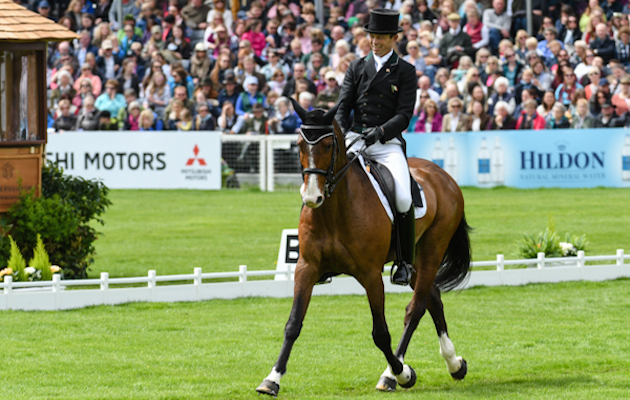 Riders have welcomed the changes to the dressage scoring system at the first Mitsubishi Badminton Horse Trials since the new rules came into force.

The co-efficient — where dressage marks at international events were multiplied by 1.5 to give a wider spread of scores — was abolished from 1 January this year under FEI rules.

This means combinations’ dressage penalties are now much closer together, giving more influence to the jumping phases.

After the first phase, less than eight penalties separate the top 25 riders.

Jonty Evans, who is lying in fourth after dressage with Cooley Rorkes Drift, said he wondered whether halving the co-efficient would have worked.

“Now horses doing a particularly good test are no longer far away,” he added.

“I think it is going to make for very exciting jumping phases.”

Former winner Sam Griffiths, who took the Badminton title in 2014, added the new scoring system is going to make a “really exciting competition”.

“It’s an irony that they’ve changed it just as I have got a whole lot better at the dressage, but having said that I’m on a proper jumper,” he said.

“Tomorrow will be a real challenge, but if I’m on my toes and give Paulank Brockagh the best ride, I know she will do it.”

William Fox-Pitt said it will make the time more influential and both time-faults and showjumping poles more expensive.

“I think there’s much less room for error with this new scoring, it takes the weight away from the dressage,” he added.

“I’m hoping Classic Moet will be one it advantages as she is a quick horse across country,” she said.

At the end of day press conference, dressage leader Oliver Townend, said the first real test of the new system was at Kentucky last week.

“I think it is a good thing, as long as the dressage judges are brave and use the full range of marks,” he said.

“I just don’t want to see a mediocre dressage score winning a four-star.”

Watch riders’ thoughts on their tests below