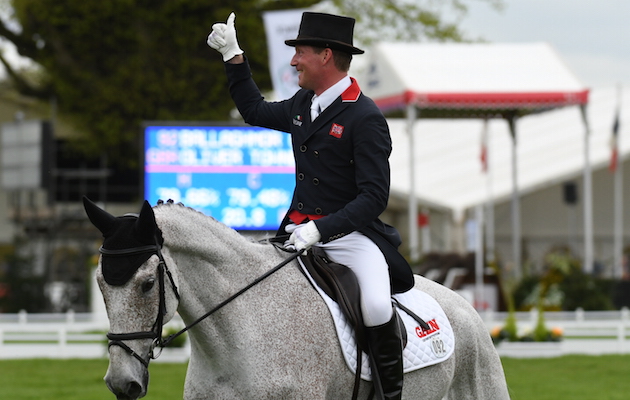 Oliver Townend has reclaimed his Badminton lead after a nail-biting afternoon of competition.

The Yorkshireman, who was the lunchtime leader on Thursday aboard his first ride (Cooley SRS), performed a stunning test with his 2017 Burghley winner Ballaghmor Class.

The judges awarded the pair a flurry of nines for their halts, flying changes, extended canter and for Oliver’s riding.

Their score of 20.8 is the best dressage test at the Mitsubishi Motors Badminton Horse Trials in 18 years, according to equestrian data company EquiRatings.

“We know what he is capable of, we live with him every day and we were just hoping that we would pull it off in the atmosphere,” Oliver told H&H.

“We weren’t overly impressed with his work this morning, but luckily he turned out to be bad in preparation and good [when it mattered].

“He was fantastic yesterday and I felt like I had just gone a little bit over, maybe he was sick of work, but it is all about having them quiet and relaxed — he was 100% on my side today.”

Oliver is also in contention for the Rolex Grand Slam title, following his win at Burghley in 2017 aboard this horse, and Kentucky last week with Cooley Master Class.

Overnight leaders Ros Canter and Allstar B held their position until after the final tea break of the afternoon, when a strong performance by Mark Todd and Kiltubrid Rhapsody bumped them into second.

“It felt like he didn’t make any mistakes, he is such a lovely, big, loose-moving horse and is quite flashy — he is starting to get to a stage where he can really carry himself.

“I was hoping he was going to get a good mark — I’ve been watching some of the other ones today and the marks seem to be getting better and better.”

Ros, who now sits in third place ahead of cross-country, told the press conference that she is hoping to “go out and mean it” on Eric Winter’s course tomorrow.

“I’m going to try to jump through the flags and go as fast as I can — I’m not renowned as being the fastest rider in the world, but I’m on a pretty quick horse.

“Hopefully it is an advantage that he is only carrying [someone as small as] me tomorrow.”

While Oliver has a 2.6 penalty lead tomorrow — giving him six seconds in hand — just two penalties separate the next 10 riders.

Cross-country starts at 11.30am, with New Zealand’s Caroline Powell and Up Up And Away the first out of the start box.