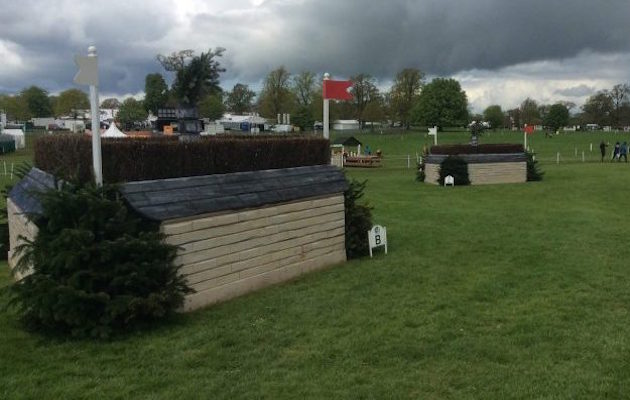 With the removal of the dressage co-efficient making the Mitsubishi Motors Badminton Horse Trials leaderboard tighter than ever, it is unlikely to be a dressage competition.

Eric Winter’s 6,700m course has 45 jumping efforts and an optimum time of 11 minutes and 45 seconds.

The exceptionally wet spring has also had an effect on the ground — a talking point among competitors over the first two days.

Although the park has dried up considerably, many riders feel this will have an impact on the results.

“It is going to be demanding tomorrow, we might see some horses doing the time, but I’m guessing not many,” William Fox-Pitt told H&H.

“There’s questions out there all the way, it doesn’t always line up – Eric’s course last year didn’t line up either — so horses can’t always see where they are going, and that is testing.

“You are going to have to have a horse who is very responsive and on the job.

“I think he has built a super track and it is demanding.”

Jonelle Price added there are plenty of places to pick up a “cheap” run-out.

“I didn’t think it was perhaps as big as last year, but then again I wasn’t riding it last year so maybe I looked at it slightly differently,” she said.

“There’s plenty to do and plenty of places you could have a silly mistake, Huntsman’s Close, coming out of the waters, you could really have a cheap 20 penalties.”

Pippa Funnell said the course is “every bit Badminton”.

“I think we are going to have to ride with our heads because the ground is going to be testing,” she said.

“We have had a lot of rain and they have done a fantastic job to produce the course they have, but there’s no doubt it is going to be a bit sticky and holding.

“Eric has built a true four-star track, there’s a lot of very big jumps and plenty of places you could run past fences.”

Overnight leader Oliver Townend agreed that it is “definitely Badminton”.

“It is definitely going to be hard work, you are going to see a lot of action one way or the other, it is a serious course,” he said.

Gemma Tattersall said riders are going to have to be “completely on their game”.

“There’s some serious questions,” she said.

“I think The Lake is a stand-out fence and the pond at the very top of the course [Hildon Water Pond, fence 20abc] will ride alright, but will need some respect, as will the coffin [Shogun Hollow, fence 24abcd].”

Tim Price added the topography of the ground will need considered riding.

“The course is big and burly, it is technical but designed in a way that things are there to disrupt you,” he said.

“There’s little bumps and grooves that take you off your line and all those little things can have a cumulative effect, but also an effect on their own.

“We will need to stay sharp and the horse to stay focused.”

Jonty Evans, who is lying in fourth place ahead of the second phase, added: “I think the questions are spread all around the course and you are going to have to really switch your brain on, use some instinct and try and ride home properly.”