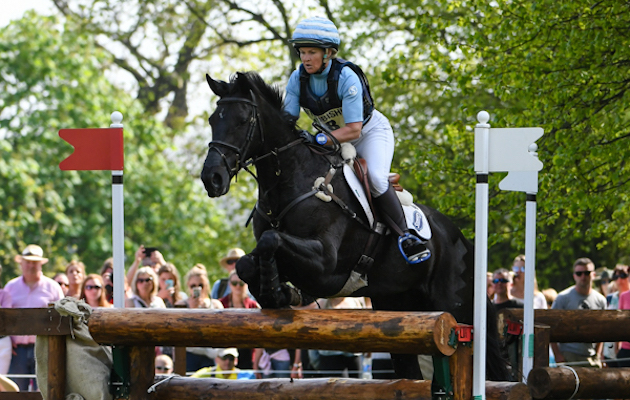 New Zealand’s Jonelle Price and her speed-merchant mare Classic Moet have taken the lead at the Mitsubishi Motors Badminton Horse Trials on a zero margin.

Jonelle and the 15-year-old flew around Eric Winter’s cross-country course to finish one second outside the optimum time and add 0.4 of a penalty to their dressage of 27.6.

Rolex Grand Slam contender Oliver Townend and his 2017 Burghley winner Ballaghmor Class are on the exact same score as Jonelle (28 penalties), but their slightly slower cross-country round means they drop into second place.

Jonelle and Classic Moet had been lying 22nd overnight, but with the dead ground and hot weather affecting many of the horses, the time proved highly influential.

She had by far the fastest round of the day — the second quickest came from Gemma Tattersall and Arctic Soul, who finished 10 seconds over the time to raise them from 35th to eighth place ahead of the showjumping.

“She was magic,” said Jonelle.

“To come here off one run [at Belton advanced] this spring and with the fact we barely ran last year [because Jonelle had a son, Otis], I felt a bit of pressure with all the talk of the time this morning and high expectations that we could be one of the ones to come close, but she was fantastic.

“I would have obviously liked to have been one second less, the scoreboard looks much tidier if it doesn’t have a decimal point on it.

“I had a mistake at The Lake, which was completely my mistake, and I had to ask a lot of her from then on and she responded amazingly.”

Oliver, who is also lying in fifth overnight aboard Cooley SRS, said the ground was “horrifically tacky” by the time it came for his round on Ballaghmor Class.

“I couldn’t find any fresh ground anywhere and the sun was still shining, there wasn’t much air, which makes it very difficult, “ he said.

First-day dressage leaders Ros Canter and Allstar B are in third, adding 6.4 time-faults to their score of 23.9.

“It was really tough, I had the most amazing ride across country here last year when a lot of people found it really hard and it was like a dream ride,” said Ros.

“We had to work for it this year, but he just gave and gave.”

There is just one pole between first and fourth place and two rails separating the top nine, so there is little room for error among the leaders.

According to equestrian data company EquiRatings, 44 out of the 76 starters jumped clear, 12 completed with jumping faults and competitors were coming home with an average of 20.5 time-faults.

Sadly Alexander Bragg’s second ride, Redpath Ransom, had to be put down after sustaining an irreparable ligament injury to his right foreleg while galloping between fences.

French rider Denis Mesples’ horse, Oregon De La Vigne, reared and fell over at the start — he was taken away in a horse ambulance and is back in the stables under observation.

Read an interview with Badminton first-timer Will Furlong in the current issue of H&H (dated 3 May).