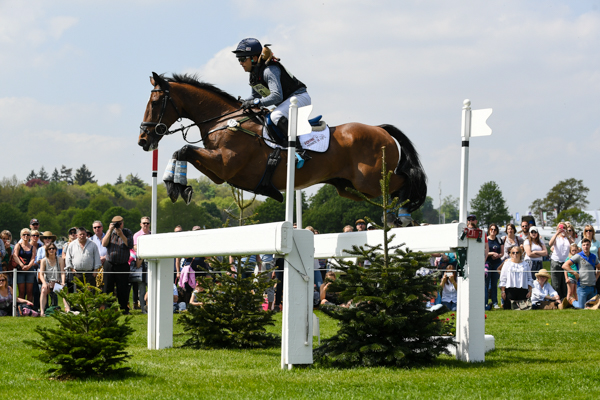 The 16-year-old finished the course with 20 penalties for a circle at the Joules Corners and 71.2 time-penalties.

“I don’t think he’ll do another big event,” said his rider Ben Hobday after his round. “He’ll take it easy educating our stable jockeys, do some eventing grands prix and go out in the field with the mares.”

Ben explained what happened at the Joules Corners today: “It was a shame I had to turn a circle. He was quite tired and he flicked his back end up really big at the first corner. I was up his neck and we had no chance.

“After that we lost momentum and he was good to keep going. But we’ve hunted him the whole winter with the Morpeth and he keeps going for hours. We just stayed in an even rhythm.”

Ben added that he has also hunted with the Tynedale, jumping five-bar gates behind fellow four-star rider and field master Jamie Atkinson. He has even had a day’s hunting with his owner, Sallie Ryle.

Ben added that Mulrys Error has had a pulled hamstring in the build-up to Badminton so he wanted to look after him across country today. Although he started out steadier than two years previously, the horse still hit a wall around the eight-minute marker and he had to nurse him home steadily. But fans will be delighted that “Mr Mulry” managed a third Badminton cross-country completion.

The combination won the Charles Owen Moment of the Year at the H&H Awards in 2016 for their Badminton double clear after Ben’s recovery from cancer. They also completed in 2015 with a jumping clear across country.

Check back for more updates from Badminton tomorrow.

Full report from Badminton in next week’s H&H (10 May), including full analysis of every phase and opinion from Oliver Townend, Mark Phillips and Peter Storr.