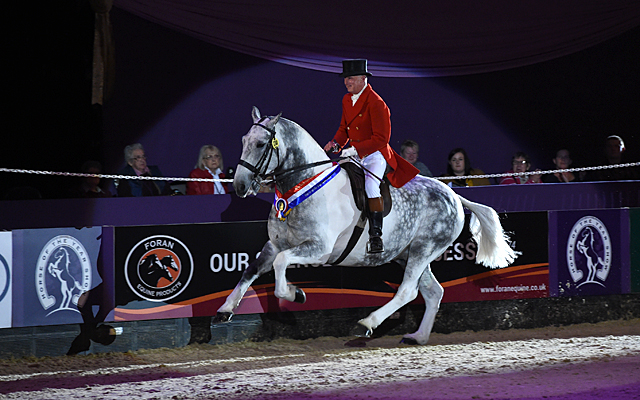 Allister Hood could hardly believe it when he and Our Cashel Blue were pulled in first in the Ripon Select Foods Supreme Horse of the Year Championship at HOYS.

“I can’t describe how it feels,” beamed Allister who hails from Norfolk. “‘Blue’ thought the crowd were all there just for him.”

Our Cashel Blue, a blue and white seven-year-old gelding, owned by Caroline Tyrell qualified for the supreme championship after they took the Cob of the Year title yesterday (8 October).

The main arena was packed out with spectators but Allister said that Blue, who is unbeaten this season and has prepared by going Autumn hunting, “stood like a rock”.

“There was a lovely atmosphere and Blue loves the attention. I knew that we had to put on a perfect performance to stand a chance of winning and my horse gave me everything,” said Allister.

“I’m known as the senior citizen of the showing world nowadays and I know that there won’t be many chances like this left for me, so I have to make the most of it while I can.”

HOYS hasn’t been all plain sailing for Allister though, after he took a tumble down some steps yesterday, pulling his inside thigh muscle in the process.

“I feel much better this evening thanks to some heavy strapping and some heat spray,” explained Allister.

Nine horses came forwards in total to the supreme championship and they were judged by Tom Best and David Blair.

“I think this is one of the best supreme competitions HOYS has ever seen in terms of the quality of performances,” said Allister.

The other contenders were: