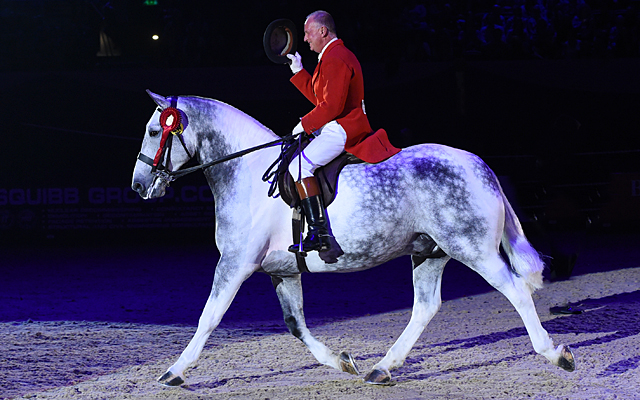 Prolific showman, Allister Hood, didn’t let falling down some steps at the Horse of the Year Show (HOYS) today (8 October) get in the way of taking the Humdinger Consultancy Cob of the Year Championship aboard Our Cashel Blue.

“It was a really silly accident — I just tripped down some steps here [at HOYS] and pulled my inside thigh muscle in the process,” explained Allister. “My son, Oliver, had to lift me onto ‘Blue’ this evening so that I could ride him.”

Allister took the championship on Blue, who is unbeaten this season in this class.

“He is one of the best horses I have ever ridden,” said Allister of the blue and white seven-year-old gelding, owned by Caroline Tyrell.

“When we went to look at Blue as and unbroken youngster, we didn’t really need to see him outside his stable,” said Allister. “We just knew he was a great stamp, so we rung Caroline to tell her about him and she said ‘buy him.'”

Allister has made good use of Autumn hunting with the Dunston Harriers in Norfolk to prepare Blue for HOYS,

“It helps to keep him in the right place mentally and also physically fit,” he explained.

Allister said that this victory marked his 63rd HOYS win, describing himself as an “old stager”. He remembers his first in 1973 at the Empire Building in Wembley.

“This win still means so much to me,” said Allister. “It is a privilege and a pleasure to ride here; it’s the pinnacle of the showing season and I hope I will be back for a few more years to come.”

Allister now looks forward to the supreme championship and the coloured horse and pony of the year championship tomorrow (9 October) on Blue.

The reserve title went to the heavyweight cob Randalstown Musketeer, ridden by Victoria Hesford and owned by Clare Twiston-Davies.

Read the full report from HOYS in the next issue of Horse & Hound (13 October).