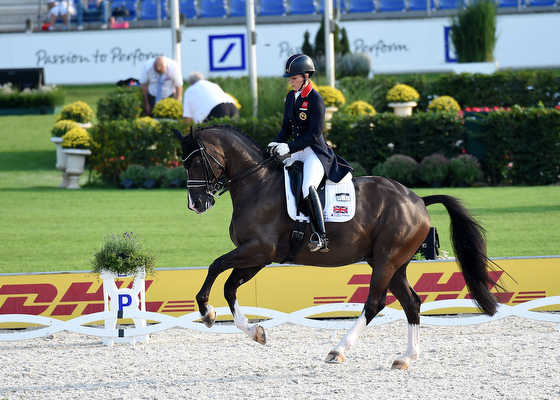 The team competition at the FEI European Dressage Championships in Aachen today (Thursday, 13 August) went right down to the wire. Ultimately, the last competitor in the ring, Germany’s Kristina Bröring-Sprehe could not do enough to pull her team up the medal table from bronze position.

The pressure was on Charlotte to deliver a performance good enough to overtake the Dutch, but mistakes in the zig-zag and the one-time changes prevented that. She and Valegro still lead the individual rankings, having scored 83.029% to second-placed Edward Gal’s 82.229%. Two judges preferred Edward’s test to Charlotte’s.

Despite winning the class individually, Charlotte was disappointed.

“The mistakes were all my fault and I’m annoyed with myself,” said the world number one.

“The beginning felt really good, but it’s tough out there – and there aren’t many horses who haven’t made mistakes. Unfortunately mine cost us the gold, but as a team we’ve performed brilliantly.”

Edward Gal eeked every single possible mark from Glock’s Undercover (pictured below), recovering from a torrid outing in Rotterdam; their 76.6% being well below their usual scores in this test.

“When he’s like that, I feel I can piaffe as long as I want and go in and out smoothly.”

The top 30 individuals from the grand prix qualify for the grand prix special, which means all four Brits go through, as Michael Eilberg finished in 29th. The special takes place on Saturday, with tomorrow being a rest day.

The teams finishing in fourth, fifth and sixth — Spain, Sweden and France — secured their Olympic qualification today as there were three spots up for grabs and the podium teams had all qualified before this championships.

For a full report on all the action, including the controversy surrounding Totilas’ performance, see the full report in Horse & Hound magazine, out on Thursday 20 August.