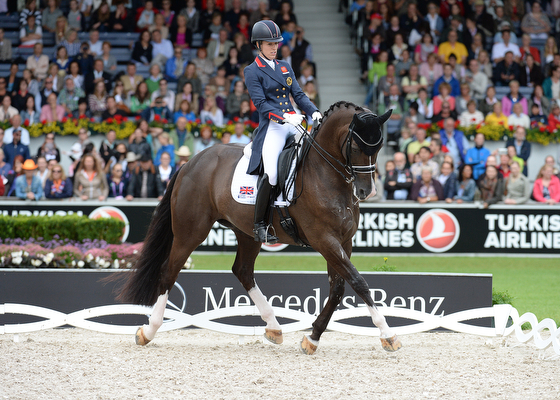 Charlotte Dujardin successfully defended her grand prix special gold medal on Valegro, posting a new Europeans record of 87.577%. However there was heartbreak for Edward Gal, who was eliminated when blood was spotted in Glock’s Undercover NOP’s mouth during their performance.

Blood in Glock’s Undercover NOP’s mouth in the grand prix special at the European Championships 2015. Picture by Peter Nixon

He was the second rider to crash out after Sweden’s Patrik Kittel’s mare Deja got her tongue over the bit and became upset, prompting him to retire.

Charlotte’s test, barring a tiny mistake at the end of the one-time changes, was crisp, clean and powerful; Valegro back to his best.

“It’s a great feeling that this tough crowd – the Germans – have come here and appreciated what Valegro and I have done,” said Charlotte, who picked up €18,000 for her victory.

Charlotte Dujardin and Valegro claim gold in the grand prix special at the European Championships 2015. Picture by Peter Nixon

Germany’s Kristina Bröring-Sprehe set the bar high (83.067%) with Desperados FRH, claiming silver. This is consolation for her nation as the Germans were disappointed to finish in bronze medal position in the team competition.

Her trending score never dipped below 80% throughout the well presented test on the 14-year-old black De Niro stallion.

Dutch rider Hans Peter Minderhoud clinched the bronze medal in the special with a wonderful ride on another stallion, Glock’s Johnson. He and the imposing Johnson x Flemmingh 13-year-old added their bronze to their team gold medal earlier in the week.

They scored 79.034%. Had it not been for a mistake in the changes, they would likely have crept over the 80% mark.

Carl Hester and the 11-year-old Nip Tuck pulled off one of the few mistake-free tests of the day to finish in fifth place with 77.003%.

“Forget Valegro, Nip Tuck’s had his moment today,” he beamed. “I’m smiling from ear to ear; it’s like having a whole pack of pastels in one go. That horse has the best work ethic and always tries for me.”

Fiona Bigwood made a few mistakes on Aterrupgaards Orthilia in their special test, claiming ninth place with 74.510%. They endured the worst of the weather, which hampered Fiona’s already compromised vision, but she was delighted with her Gribaldi mare’s attitude.

Britain’s Michael Eilberg was drawn first to go initially, but after Totilas withdrew from the competition yesterday, the Norwegian Trude Hestengen went in ahead of him.

Mistakes in the one-time changes pulled the pair’s score down just below 70%, for the second time at this competition.

“It’s a good score but I’m a bit annoyed about the mistakes as the horse’s physique and way of going were really good,” he said. “Sadly problems in the one-times aren’t a new phenomenon for this horse.”

Michael Eilberg and Marakov in the grand prix special at the European Championships 2015. Picture by Peter Nixon

Michael, who finished in 19th place, won’t defend his British Dressage nationals champion title with Marko, but he has a number of other horse qualified for the show, including Woodlander Farouche’s dam, Woodlander Dornroschen, in the grand prix.

Charlotte, Carl and Fiona have all qualified for the individual freestyle, which takes place tomorrow (16 August) and is being shown live on the BBC.

For a full report on all the action, see Thursday’s Horse & Hound magazine – a special European Dressage Championships issue packed with news, photos, analysis and comment.