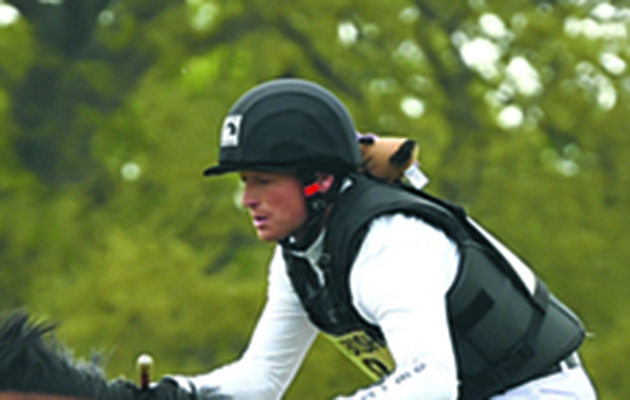 Michael Jung and La Biosthetique-Sam FBW have taken the lead at the half-way mark on cross-country day of the 2018 Mitsubishi Motors Badminton Horse Trials.

The pair survived a tricky moment at the corner at fence 14 (the Outlander PHEV Mound) taking out the white flag in an otherwise strong round.

“When you gallop into the finish and when you ask the horse to go forward and you feel them do it, that’s really nice,” said Michael.

“He was really strong and in a good condition — it was a really great feeling.

“It was maybe not the nicest round, it was a nice course but the ground made it much more difficult.

“My plan was to be clear inside the time, but I’m very happy with [how it went].

“I feel like Sam loves what he does and he loved the cross-country, to gallop forward is a nice thing for him and that makes me happy.”

Currently lying in second is Oliver Townend on his first ride, Cooley SRS.

“I was forced to go long at the lake because he never had his eye on it, but other than that, it was a good round,” said Oliver.

“He is a first time four-star horse and to come to Badminton is a big ask, and he was clear and relatively quick.”

Meanwhile US rider Lauren Kieffer and Veronica have risen from 10th after the dressage to a provisional third, after adding nine time faults to their dressage of 25.

The new scoring system has sparked debate. Find out what the likes of Oliver Townend, Jonelle Price and Jonty Evans

The time has proved elusive for the first 44 starters.

According to equestrian data company EquiRatings, the average number of cross-country time faults at Badminton since 2008 is 15.1.

This was also the same number of time penalties separating the top 54 combinations after the dressage.

Problems have been spread throughout the course, with The Lake and Huntsmans’ Close the most influential so far.