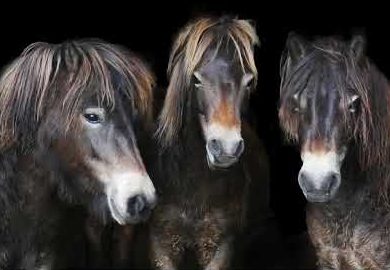 Have you ever watched a herd of ‘wild’ Exmoor ponies galloping across the moor? Now is your chance…

This short film includes footage showing the semi-feral Exmoor ponies of Exmoor National Park being gathered in this year.

The ponies are seen crossing the River Barle on Withypool Common before cascading down to Lancombe Crossing on Brendon Common and galloping across the moor. It features Exmoor ponies from the Milton family’s Withypoole Herd 23 — a herd which is celebrating its 200 year anniversary — and Tippbarlake Herd 387, owned by the Floyd family.

Exmoor farmers and landowners in the Moorland Exmoor Pony Breeders Group (MEPBG) — which includes the Exmoor National Park Authority and the National Trust — are working to safeguard the ponies of Exmoor National Park, which are currently listed as an endangered breed.

The MEPBG Exmoor herd owners are seeking to improve breeding programmes, moorland management, welfare, promotion and opportunities for the ponies, particularly for the colt foals, which are required to leave the moor each autumn after weaning.

From this autumn, the group is issuing MEPBG Certificates of Authority for MEPBG members’ Exmoor ponies born and bred in Exmoor National Park. The certificate will recognise the status of both pedigree and non-pedigree Exmoor ponies, born out on the moor, or in ground on the farms. Certificates will be authenticated by herd owners listing details in the MEPBG Heritage Exmoor Pony Register.

“While we continue to work with the authorities to try and resolve ongoing problems with DNA parentage verification and registering of stock, which is resulting in far too many perfectly good purebred Exmoor ponies being excluded from the stud book. The dangerously small gene pool can’t afford to lose these proper Exmoor ponies.”

Contact details of the MEPBG Herd owners can be found in the MEPBG Breeder’s Directory.

For all the latest equestrian news and reports, don’t miss Horse & Hound magazine, out every Thursday.