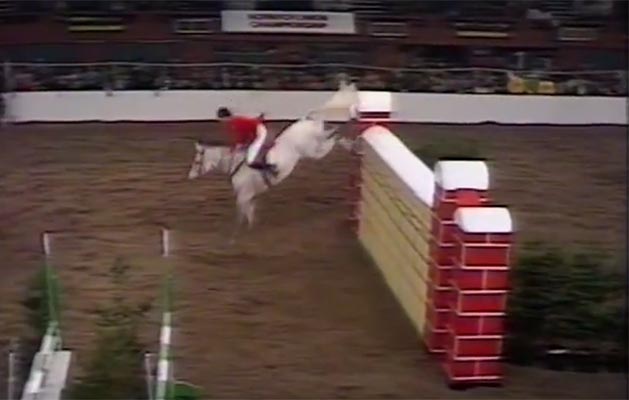 It's Throwback Thursday time, and with Horse of the Year Show 2017 underway, we rewind the clock 40 years to a particularly memorable Puissance class at the show...

Horse of the Year Show at Wembley, London, 1977

The Wembley crowds were on the edge of their seats for the eagerly anticipated Puissance at Horse of the Year Show. But the 1977 class was to take an unexpected turn, even by its own thrilling standards…

The legendary Yorkshireman Harvey Smith — famed for his rebellious attitude on the showjumping circuit — enters the arena on Graf.

After the grey effortlessly clears the 7ft4 wall, Harvey is determined for it to be built bigger.

“He wants it to go up,” says the commentator. “Oh, he’s determined — but the judges have said that’s the last round.”

The rules stated that the judges could decide to end the class after a third jump-off, forcing Harvey to share the 1977 title that night with fellow Yorkshireman Graham Fletcher.

“And Harvey is going out… In fact, I’m not so sure he’s not going to come diving round here to ask why we’re not going on with another jump-off,” says the commentator in disbelief. “Yes he is, he’s going like mad.”

One of showjumping's greatest characters has been honoured

But Harvey’s impulsive dash up to the judges’ box was to no avail — they stuck to their guns and a fourth jump-off wasn’t permitted.

“Well Harvey Smith, to say the least of it, was pretty cross about that,” concludes the commentator. Something of an understatement we imagine.

Standby for all the drama from this year’s Puissance at Horse of the Year Show on Saturday evening (7 October 2017) in the Andrews Bowen International Arena.

And if you’re not able to get to the Birmingham NEC, all the action on Saturday night will be being live streamed on the British Equestrian Sport TV website from 6.55pm.