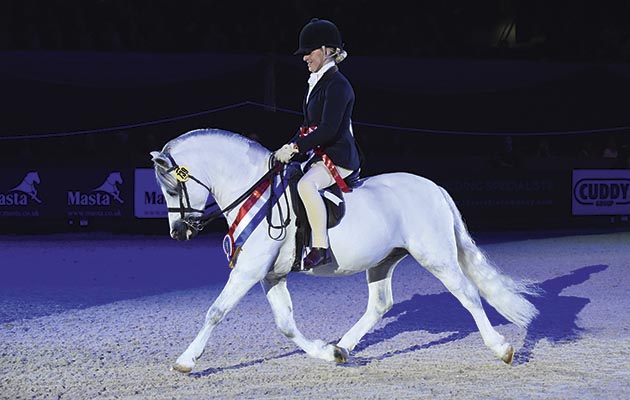 Sarum Rembrandt gleamed under the spotlights to be crowned supreme pony at last year’s Horse of the Year Show (HOYS), but underneath his stunning looks and eye-catching movement is a very mischievous pony, as producer Sarah Parker reveals in the following video

“At home he’s grumpy,” says Sarah. “He lives next door to the coloured Diamond Geezer and Remmie hates him — he plunges at the door when he passes.

“But Remmie is a loving character really — he’s just got little man syndrome.”

When H&H visits, Remmie leaps around on the end of a lead rope while neighing and squealing at horses around him.

“He’s a cheeky character and behaves like this even when we’re turning him out — only the boys lead him to the field,” says Sarah. “If he were human he’d have an asbo.”

3. He likes to fool around

His behaviour is equally cheeky when he is unloaded at a show.

“He comes off the lorry and plunges around — it looks like he’s unbroken. But the minute my foot is in the stirrup he’s a dope on a rope and very lazy,” says Sarah.

4. He hasn’t always been a whitey grey

“Remmie came to me as a five-year-old and he was a darker grey then, quite dappled and with black points. As he’s got older he’s got lighter,” says Sarah.

5. He hates being washed…

“Remmie doesn’t like having his mane washed,” reveals Sarah. “He particularly hates us touching around his ears, so washing him is a drama. He’ll have a nice clean body but not such a clean face.”

6. …So he keeps himself clean

“When we’re in the ring he’s very good on the go round,” says Sarah. “He really floats and covers the ground, so I have to be careful that I don’t lap people.”

It’s a different story in his individual show, though.

“He’s not so easy because he’s lazy. I have to get after him and make sure he’s alert when he comes out of the line up so that he shows himself off,” explains Sarah.

“The first time I saw him I knew he had potential because he’s got amazing limb and is a massive mover. But he’s hard to ride in the ring because he’s so lazy. How can you better being supreme at HOYS — it’s something I’ll never forget.”