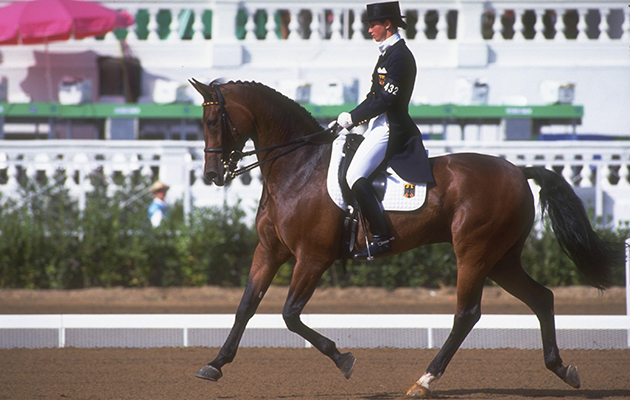 At the recent Global Dressage Forum held at the Bartels Academy in Holland (26-27 October), seven horses were put forward as the best the sport has ever seen. Find out why Rembrandt made the cut

Here was an incredibly light-footed, energetic horse in a time of chunky, old-fashioned animals who had to be ridden with a lot of strength.

And he was bred in the purple — his mother was the full-sister to Ahlerich and his father was the foundation sire Romadour II.

Richard Davison remembers a “dancing machine with a small girl on board”. “They changed the course of the dressage world.”

The horse had a vertical neck position but, as with Totilas, his extraordinary movement came from his flexibility at the elbow, which is linked to the conformation of the upper forearm.

At the recent Global Dressage Forum held at the Bartels Academy in Holland (26-27 October), seven horses were put forward

He also has another trait that many top horses show: that the forelegs are placed really near the front of the horse: when viewed from the side, there is very little chest in front of the forelegs. This makes the job of transferring the weight on to the hindlegs — to free up the front to be expressive — easier.

He was more of a ‘blood type’ — carrying a high proportion of thoroughbred blood than many of his dressage predecessors.

“Nicole was not well known and she was competing against seasoned medalist riders,” he remembers.

“They won and it was a pleasure to see dressage working as it should, with lightness and harmony.

“The horse was incredibly sensitive and I remember one test where she was going round the edge and one judge coughed. Rembrandt jumped and Nicole told them sternly not to cough.

“We all had a little cough the next day for a joke.

“They were such a light-footed, elastic, sparkling, harmonious, generous pair who had showed it was not just power/experience that made good dressage; harmony and precision with lively impulsion was better.”

The horse’s ability to collect his extended canter in three strides flat at the end of a diagonal was his trademark talent. He could go from 0 to 60 and back again at the drop of a hat.

Bernard added: “They embodied the French definition of impulsion: the desire for the horse to carry himself naturally forward.”