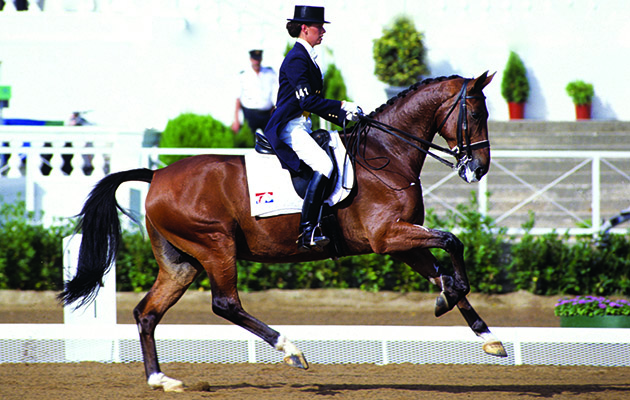 At the recent Global Dressage Forum held at the Bartels Academy in Holland (26-27 October), seven horses were put forward as the best the sport has ever seen. Find out why Bonfire made the cut

Bonfire made appearances at 15 major championships, including three Olympic Games (one at which he won individual gold – Sydney 2000) and six World Cup finals, five of which he took gold at.

Anky remembers that the horse would stand in his box like a hackney, with his front legs out in front of him and his hindlegs way out behind.

“He dug a hole in the front of his box and stood with his front legs in it,” she says. “We thought something was wrong at the beginning.”

His track-record proved otherwise and he ranks among the soundest grand prix horses ever recorded.

Conformationally, he had a very strong topline, back when not many horses did, as specialist breeding for dressage had not yet begun. He had strong and active hindlegs, with strong, short pasterns, which was also quite unusual. What he lacked in the conformation department, he made up for with the power of elasticity; that is what set him apart from his rivals. That and his willingness to always go forward and offer more.

“He didn’t start out as a winner,” says Anky. “I came last as often as we won in the early days. With him I had the highest score and the lowest — one test we got 45% because he wouldn’t walk at all.”

Once his grand prix career took off, Anky was offered a blank cheque for the horse. He wasn’t for sale.

During his retirement there was a course at Anky’s yard and Bonfire’s x-rays were taken. The vets couldn’t believe how clean they were; as if from a much younger horse.

He died at age 30 at Anky’s yard after a happy retirement.