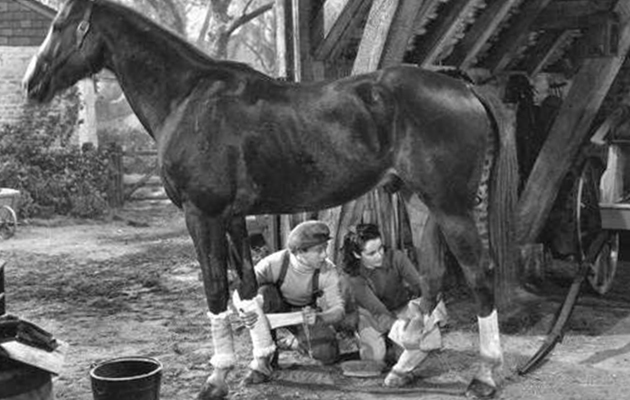 Was National Velvet a crucial part of your horsey childhood? Jen Scouler takes a nostalgic look back at the film which launched Elizabeth Taylor’s career

Every child growing up with a love of horses has their own aspirations. Whether it’s to win the Hickstead Derby, ride along the beach or even just to sit in the saddle for the first time, the world of horses can’t help but inspire adventure.

National Velvet was the cinematic embodiment of those dreams, a movie from the golden age of Hollywood that brings with it utterly unabashed optimism.

It’s also an exercise in make-believe, transforming California into a romanticised English countryside and Elizabeth Taylor’s hat hair into immaculate curls. Yet whilst its production was classic Hollywood, National Velvet contains a sincerity that has kept the film timeless.

For those unfamiliar, National Velvet is set in 1920s England and tells the story of Velvet Brown (Elizabeth Taylor), a 12-year-old girl who is obsessed with horses. Using all her savings, Velvet enters and wins a raffle for an unruly stallion she calls The Pie. Knowing Pie is destined for greater things, she enlists the help of mysterious traveller Mi Taylor (Mickey Rooney) to train for the greatest horse race in the world – the Grand National.

When Enid Bagnold’s original novel began to be adapted for the screen, Elizabeth Taylor lobbied ferociously for the lead role. The actress had grown up around horses, having been given her first pony Betty at three years old. Her determination to get this part mirrored her own determination to become an equestrian- Taylor stated in her autobiography that the first time she sat on her pony, she was thrown unceremoniously into a patch of nettles. She didn’t give up, and when the role of Velvet Brown came along, it looked like the perfect opportunity.

However, the producers believed Taylor to be too small. For months she ate huge breakfasts, did stretching exercises and supposedly grew three inches before gaining the part. The sacrifice was worth it- Taylor later named National Velvet as the ‘most exciting film’ of her career.

From loose horses, Johnny Depp's saddle slipping and a serious booting, films and TV shows have provided us with som

In the novel Velvet’s horse is a small piebald horse, but for the movie the producers knew that they needed a true four-legged Hollywood star. Enter King Charles, a seven-year-old chestnut thoroughbred and grandson of the famous racehorse Man O’ War. Trained as a showjumper, he bonded with Elizabeth Taylor on set and was eventually bought for $800 (£530) by MGM, to be given to the young starlet on her thirteenth birthday.

She did much of her own riding on the film and it shows; no one who watches the film can forget the scene where Velvet gallops the Pie alongside a moving train to bid a joyous farewell to Mi on his way to London.

Nevertheless, not all the stunts were done by Taylor. Monty Roberts has claimed to have been a stunt double for the film in his early days, well before his involvement with natural H
horsemanship.

One memorable scene that sums up the film takes place when Velvet’s mother quietly tells her that she has won the raffle, and she looks out to see a huge procession of villagers bringing her the horse. Corny? Of course! But there’s nothing wrong with that occasionally, and it makes it a perfect film for a rainy Saturday when everything seems a little glum.

Like many young horse enthusiasts, Velvet is a girl consumed by unlimited potentials. In some lovely scenes, her passions and firm principles are encouraged by her mother, who knows ambition from her own youth.

The fantastic Mickey Rooney should also be mentioned. His lengthy acting career already in full swing when National Velvet came along, he embodies the torment and concealed determination behind Mi. The actor went on to do another adaption of a novel about horses, The Black Stallion.

National Velvet has been a screen favourite for horse lovers for many years, and with good reason. The riding scenes are stunning and the film understands, without ever patronising, the obsession with the equine world that is shared by so many people. If you’ve seen it, watch it again. If you haven’t and you’re horse-mad, find a copy. Now.