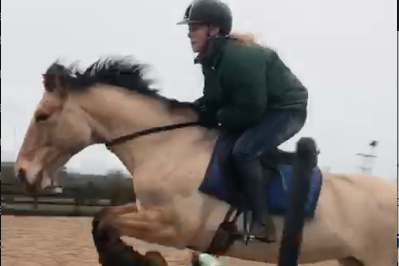 Four-star event rider Imogen Murray set herself a challenge to steer a horse round a course of showjumps with no bridle — and called it part fun, part training.

“I wanted a winter challenge,” said Imogen, 25. “I like doing silly things sometimes — everything is so serious and it’s nice to have a bit of fun.

“I’ll never have to do that in competition, but it’s good to know I can — it improves your riding. It makes you more conscious of what you’re doing with the rest of your body — not being able to rely on the reins. And it’s good fun for the horses too, it improves their outlook.”

Imogen’s selected mount was the 14.2hh Ive Dun Talking — known as Petal — who has won at intermediate level this year.

“The girls [on the yard] said Petal would be wild, because she goes so fast with a bridle on, but she was great,” Imogen added. “She’s such fun to ride — she can go on a horse or a pony stride, so you can charge around.”

Imogen first tackled the course with a bridle, but the reins knotted. Then she added the neckstrap — and removed the bridle.

“This video was taken the first time I’d jumped without a bridle,” Imogen said. “We nearly jumped out of the arena when I just had the knotted reins, because I wasn’t looking exactly where I wanted to go and Petal locked on to the arena fence.”

And Imogen is already eyeing up another dare.

“I want to do it without a bridle or saddle — just a neck strap,” she said, “but I need to find another horse, as Petal is too round.”

More’s the shame, as Petal is a honeypot for Imogen’s social media exposure.

“If people come to visit the yard, they’re not interested in seeing the four-star horse — everyone loves Petal,” Imogen says.

To read a full interview with Imogen Murray, don’t miss the latest issue of Horse & Hound magazine, out now