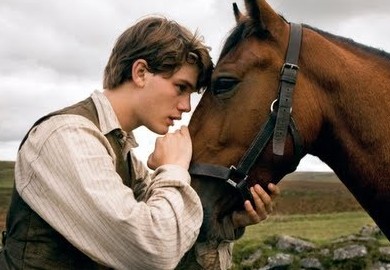 Fans of horse films were let in for a treat in 2011, when famed film director Steven Spielberg set to adapt Michael Morpurgo’s novel War Horse. Already beloved both as a book and a stage play, the decision to take the story to the big screen led to some very high expectations worldwide. With this film, Spielberg wonderfully acknowledges the silent soldiers of the First World War and tells the story from an equine perspective with emotion and subtlety.

War Horse follows the story of a horse called Joey, who is bought as a colt by struggling farmer Ted Narracott (Peter Mullan) in a moment of impulse. Just as Joey forms a bond with Ted’s son Albert (Jeremy Irvine), World War I begins and the two are separated, each to find themselves deep in the overseas conflict. As we watch Joey’s miraculous journey through France, the film gradually shows just how the war affected soldiers on both sides of the battle.

As the lead character of the film, the horse that played Joey had to be pretty special. In fact, it took no less than 14 horses to play him, equipped with their own specialist makeup team to ensure all had the same markings and on-screen appearance.

However, the primary equine actor of the bunch was already a Hollywood veteran. Finder’s Key, a horse with his own Facebook page, is a 16 year old 15.2hh thoroughbred, who by the time of War Horse’s filming had already played the star role in the racing film Seabiscuit. His acting abilities were so strong that he even managed some cross-gender acting by playing Joey’s dam in some of the earlier scenes.

Steven Spielberg doesn’t do things by halves and knows how to conduct a battle scene, with a proven track record in portraying war in films like Saving Private Ryan. Adding horses to the mix for this one wasn’t easy but the director has spoken of his pride in managing to construct a film that used so few digital effects.

This may be hard to believe of course when War Horse features a horse leaping over a tank in the trenches. Yet inventive stunt work led to the reality portrayed on screen. In one particularly heart wrenching scene, Joey finds himself trapped in barbed wire, a stunt that was achieved mostly by the simple use of rubber prop wires.

Up to 280 horses were used in a single scene, and the dramatic cavalry charge by the British soldiers involved 130 extras on horses, something that can’t have been easy to co-ordinate.

The story of Joey is miraculous fiction. We’d all love for there to have been hundreds of wonderful stories such as his, but the reality was that many horses didn’t make it through the war. In fact, a heartbreaking total of eight million horses were killed during World War I, a number that is almost unimaginable now.

It was at a time when new technology was overtaking the old traditional ways of battle. The ill-fated cavalry charge of the movie captures this perfectly, reminding us of how the First World War confronted many soldiers with technology far more destructive and dangerous than they were prepared for.

Spielberg’s War Horse is a sensitive adaptation that understands this context, featuring some fantastic performances and stunning visual techniques that convey the themes of the film. Actor Jeremy Irvine, a complete newcomer at the time, is excellent as Joey’s owner Albert. An early scene where he pleads and coaxes Joey to use all his strength in ploughing a rocky field is made so believable by the pain and determination wrought on Irvine’s face.

On another note, the score by acclaimed composer John Williams is one of his best works yet. I’ll admit that even just a clip of the music from the trailer led to some watery eyes from this particular writer, it’s just that good (or I’m a massive softie, one of the two).

However, ultimately the star of the film is — and was always going to be — the horse. For that reason, War Horse is a perfect movie for equestrians, as well as being a worthy tribute to the human and equine casualties of the war, who should always be remembered.