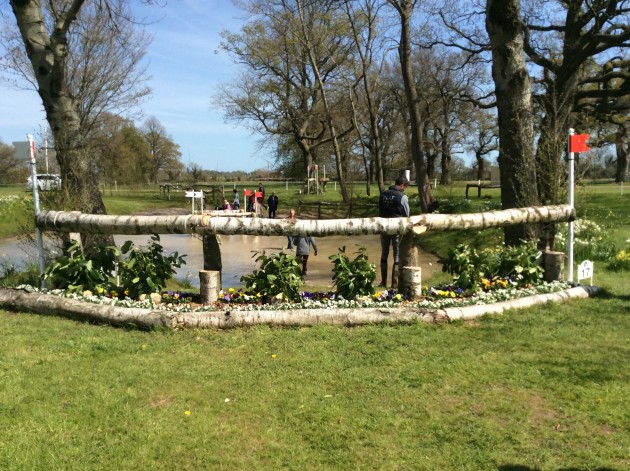 Check out our fly through videos from two of the most difficult fences on the Mitsubishi Motors Badminton Horse Trials cross-country course this year.

At the Gatehouse New Pond (fences 17-19), course-designer Giuseppe della Chiesa has set a tough test for the riders on this beautiful site. The water is surrounded by daffodils and trees and there is a glimpse down an avenue of trees to the side of Badminton house.

Riders won’t have time to admire the setting though. They jump into the complex over a rail — all the fences here are made of silver birch, chosen specifically because the colour and texture of the material should make it easier for the horse’s to see among the shadows.

Then it’s into the water and over a big open parallel, which utilises MIM Clips, the Swedish frangible devices being used in Britain for the first time this year.

Riders then make a left-hand turn on to a massive open right-handed corner. Obstacles along the way guide them along their route — but also stop them getting too square on to the fence and potentially making it easier.

Several different alternative routes are possible here and riders can circle between elements. The alternative to the parallel in the water is the first rail in, jumped in reverse. And there is also an option instead of the corner, a parallel reached by turning right out of the water instead of left.

This iconic test is back on the course at fence 21 after a few years away. It consists of a rail hanging out perilously at an angle over a gaping ditch.

“Any year the course includes the Vicarage Vee you now it’s serious,” said Sam Griffiths. “I’ve jumped it in lots of different incarnations and it never gets any easier.”

The alternative here is to jump the ditch on its own, then over an angled rail in the ditch. Riders then have to cross back over the ditch again over a bridge, so this route will be time-consuming.

Follow all our Badminton online coverage and make sure you buy next week’s magazine (12 May) for a full 24-page report, including columns from Carl Hester, William Fox-Pitt and Mark Phillips.