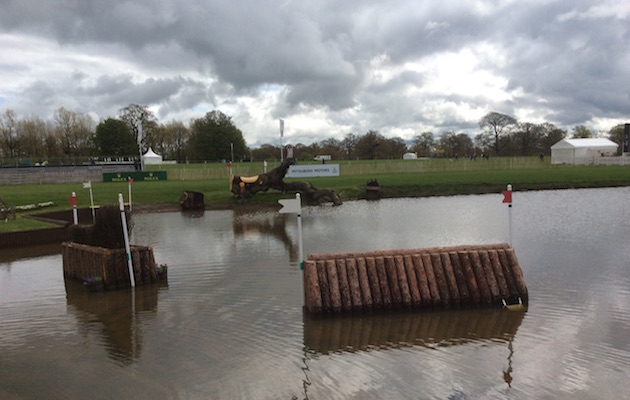 There was plenty of drama on the 2018 Mitsubishi Motors Badminton Horse Trials cross-country course.

Eric Winter’s CCI4* track was set over a distance of 6,700m, with 45 jumping efforts and an optimum time of 11 minutes and 45 seconds.

With a combination of a wet spring, causing tiring ground conditions, and warm weather, the time proved impossible to make.

While leaders’ Jonelle Price and Classic Moet came the closest at just one second over, equestrian data company EquiRatings calculated the average number of time faults for clear jumping rides was 20.5.

Huntsman’s Close, The Lake and the Eclipse Cross Pond proved to be the most influential combinations of the day.

“We thought when we walked the course it was all about making it happen, you put him at a fence and he will try and jump it,” said Mark Todd of his first ride Leonidas II.

“I had originally planned on taking the longer route [at The Lake] after jumping part B, but I don’t think I would have turned him, so I just picked him up and pointed him at the way out — it wasn’t pretty but we got over it.”

Imogen Murray and Ivar Gooden were among those to cope well on the sticky ground, with the gelding still full of running as they came through the finish.

“At the first half of the course I wasn’t really going for the time — he came out of the start box quicker than he normally does and I don’t put any leg on him, we had a lot to do out there and I didn’t want him to be tired half-way round,” said Imogen.

“Then we jumped through the hollow [14, 15, 16ab Outlander PHEV Mound] and I thought ‘you know what, I’m not going that slow and he is full of running’. So I kicked on and he flew.”

Andrew Nicholson added the course rode as it had walked.

“It was hard work and the ground is as soft as I thought it would be, which when you are out there for 12 minutes is hard work for them.

“Nereo might be old, but he is reliable and has a big engine.

“I wouldn’t want to be on a young, inexperienced horse and trying to go inside the time. There were quite a few places where I was very pleased Nereo has the mileage.”

The final veterinary inspection is held at 8.30am tomorrow morning, with the first part of the showjumping starting at 11am.

The showjumping for the top-20 will start at 2pm.

Read an interview with Badminton first-timer Will Furlong in the current issue of H&H (dated 3 May).