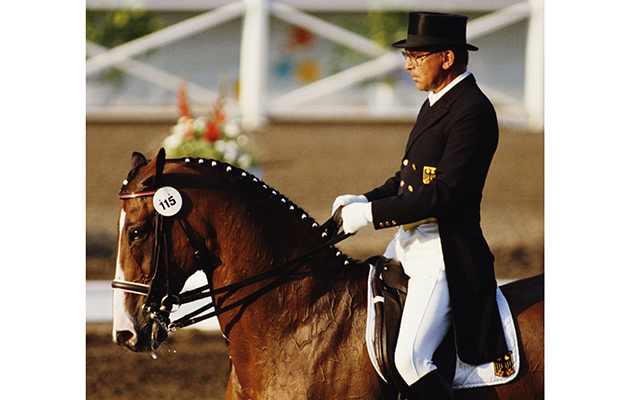 This charismatic horse had “unlimited energy” and was “a genius and a maniac” according to his late rider.

Chosen at the Westfalian auction, the attractive bay’s price went beyond what Reiner and his wife Ruth were prepared to pay. However, they received a call soon after, telling them that they were the new owners of the horse, as friends of theirs had bought him for them.

When he first arrived at the Klimkes’ yard, shortly afterwards, he refused to go in the stable. The only way the groom, Claudia Rosner, could coax him in was by reversing him.

He eventually conceded and allowed them to lead him into the stable, but he always had to jump over the threshold, particularly of unfamiliar stables when out at shows.

The first show Reiner took him to, they competed in both the dressage and showjumping competitions, then had to decide which route to take with him.

Although dressage became the chosen path, Reine always jumped the horse, including taking him cross-country “for fun” throughout his career.

By seven he was competing – and winning – at grand prix.

He was another horse born before the specialisation towards breeding for a specific discipline came in, so he was conformationally not ideal for the job.

Equestrianism : Dressage Nicole Uphoff (GER) on Rembrandt during the 1992 Olympics.

At the recent Global Dressage Forum held at the Bartels Academy in Holland (26-27 October), seven horses were put forward

He had long hindlegs and short front legs – the influence of his thoroughbred sire. He compensated for this with a sloping femur. He had a straight shoulder but an active elbow, making him expressive in front. He possessed the will and attitude to overcome his physical disadvantages. But that came with quirks.

His riders and handlers had to contend with his spooky nature and unusual character for his entire career; once when competing at Madison Square Gardens, the show was on the fifth floor. Ahlerich point blank refused to go through the black doors leading up to it. So his handlers were forced to wait until another horse showed up that he could follow in. They knew not to persevere alone. He was a horse who made people think outside the box.

He is best remembered for his performances at two Olympic Games, most notably the 1984 LA Olympics where he won individual and team golds and did an entire lap of honour in one-time changes.

That phenomenal display of horsemanship and inventiveness inspired Joep Bartels – among others – to invent the idea of the freestlye to music, which began to be developed soon after and is now the flagship ‘product’ of dressage sport.

He was bred by Herbert de Baey – who also bred Rembrandt. It’s pretty impressive to have bred two horses on this exclusive list of best dressage horses ever.

Ahlerich was built downhill for a dressage horse, but his desire and skill for the work made him very good at it.

When Reiner Klimke was away, he would ask Claudia to ride the horse instead. She was nervous of him; he wasn’t naughty per se, but liked to “cavort”, so she would always try to think of excuses.

“I would always try to think of excuses, or ask someone else to ride him,” she remembers.

He was put down at the age of 21 after a bout of colic.