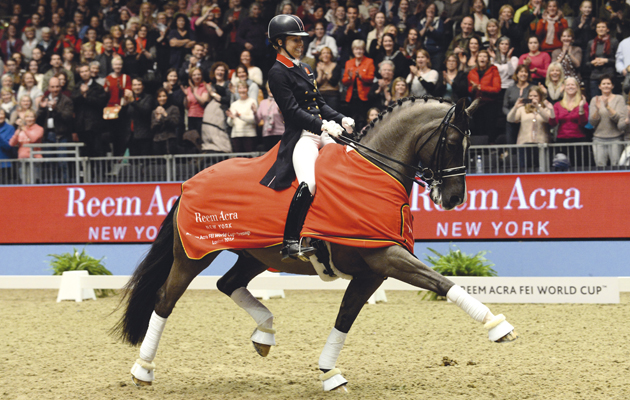 At the recent Global Dressage Forum held at the Bartels Academy in Holland (26-27 October), seven horses were put forward as the best the sport has ever seen. Find out why Vaelgro made the cut

Valegro, the smallest horse on this illustrious list of best dressage performers of all time, also failed his stallion grading.

When he was a two-year-old colt, he was taken by Negro’s owner Gert Jan van Olst (who had bought him as a foal) along with seven others by the same sire. None of them passed the licensing.

“In those days, Negro’s reputation as a sire wasn’t great,” remembers Gert. “It was only his second crop of offspring, and he wasn’t very modern. The inspectors didn’t really want his type.

“Now, with Negro’s current reputation, Valegro might have been accepted.”

Carl Hester had spotted the colt, and bought him for €5,000. He stayed with Gert and his wife Anne to be castrated and backed.

With the benefit of hindsight, does Gert regret selling him? “We sold him as we had bills to pay and he’s found the perfect place; I can’t imagine him living anywhere better,” he says.

But it wasn’t all plain sailing.

“A year after buying Valegro, Carl phoned,” recalls Gert, “and said ‘I’ve got too many horses, so I’m sending him back for you to sell.’ So he came and we rode him a bit. Then he was going so well that we told Carl to take him back as it was crazy to sell him for such little money. There had been a buyer — a lady from Denmark — ready to purchase him, but Carl took our advice and took him home again. Bad luck, Denmark!”

His now part-owner Roly Luard became interested in the horse, known as Blueberry, when he was five.

“I saw him working as a five- and six-year-old and I said to Carl that if he ever wanted a partner in this horse to please let me know.

“After we’d sold another that we shared, he said, ‘Right, you’d better buy half of Valegro now’.”

Carl had already ridden Roly’s horse Maxwell while she’d had a broken leg, and they shared Escapado, so they had an established relationship.

“Carl asked me if Charlotte could ride Blueberry,” recounts Roly. “I saw the logic, so I agreed: we desperately needed Uthopia on the team for London 2012, so it made complete sense. Plus Carl wanted to give Charlotte a real chance.”

The partnership blossomed, claiming championships galore while working their way up the levels.

“I was sitting at C terrified of nationalistic judging,” she says. “My writer was going crazy that I’d over-marked him.

“I was so scared at the end when I stood up. The score of 88.1% was easily the highest mark I’d ever given and — to my great relief — the other judges were in line with me. Still, I could have given him another 20 marks without trouble.

“He’s the most wonderful horse to judge.”

When offers started trickling in, Carl and Roly were reluctant to let the horse go.

“Nobody wants to see good horses leaving the country,” she says. “We talked to two interested parties who made very good offers. At the same time, we were also trying to make a syndicate, which works in racing, but doesn’t seem to in dressage; not in the UK anyway. We talked to lawyers for a long time, but it failed dismally.

“Then, thanks to Horse & Hound making it known we were looking for people to buy in to Valegro, Anne Barrott came forward.”

The horse’s future is now secure.

So what contributes to his talent? His rider, of course, but there’s more to it than that.

His forelegs are at the very front of his body. He has a very sloping croup and a vertically set, arching neck.

He can jump off the ground in any movement or pace and has an astounding ability to lengthen and shorten while maintaining his rhythm.

And how did he get his name? It stemmed from a conversation between Anne van Olst and Spencer Wilton.

“We were sitting having a glass of wine — in the bad old days when we both drank and smoked,” laughs Spencer. “And we were talking about a very nice Danish stallion called Allegro, a son of Absatz. But Valegro’s name had to start with a V and we weren’t feeling very inventive, so Valegro it was!”