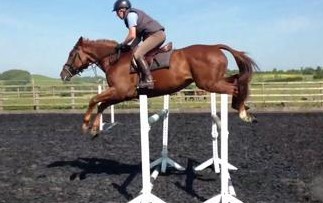 The train’s automatic door started closing while I was half way through it and my rucksack got trapped in it. I tried rather unsuccessfully to yank it through and, panicking slightly, turned to push the ‘open’ button which allowed me time to free it and despite losing balance and nearly falling over remain united with my precious belongings.

I thought I’d saved face, but upon turning to look back through the window in the now firmly shut door I could see numerous unamused Londoners peering back. Yes, the country boys were in London town.

There’s a big difference in me when I get to the big smoke. I’d ridden seven horses that morning, confident in the knowledge I knew exactly what I was doing, but three hours later, I felt like a different bloke, somewhat lacking in confidence as we traversed London.

I have to say though I actually really like it there…it’s always a mini adventure, and this one took me to my sister Fiona’s annual Christmas drinks party in Chiswick.

We had a lovely time, meeting a lot of great people, but generally James and I get the same responses when people find out what we do. One lady asked this question, and I said that James is a shepherd.

“Yeah, yeah of course he is. Now what does he do really?” was her response

She had to clarify with James who was talking to someone else that I was being truthful before telling him Christmas must be a busy time of year for him with “watching his flocks by night and everything”. Then I told her I ride horses all day.

Some city friends of my sister do know what I do though and asked after Bozzie (Cornacrew) which was lovely. One even said she’d found herself shouting “Go Bozzie” at her computer screen when watching him going round Pau online.

We had a top evening and it was great to see Fi, as during the eventing season I never see her unless she comes to watch at an event, which is a rarity.

Back in the comforts of the Rutland countryside, we had a super staff and owners party at The Blue Ball pub in Braunston, where 40 or so people came for a drink, buffet dinner, cake and short film review of 2015 (see video top) to say thank you for their support and input.

It was a great evening, and lovely to be able to treat people that have shown so much support to me and my riding during the past year. It was very humbling to have so many there and great to catch up with them all. I found it a lot less nerve-wracking doing a speech to everyone having had practice with a Pony Club talk and BHS lecture recently. But although those two experiences have honed my public speaking skills I kept this one short and sweet, much to everyone’s relief I think.

I’ve been a very lucky fellow, and been horse shopping this winter. I’ve tried some super horses and I feel so privileged to be in the position to progress my career with some extra horsepower.

Competition wise, I took some horses jumping last week which was great fun, and last Sunday, I had my first taste for a long time of British Dressage.

Wally (Wall Street VB) was a winner in the elementary, and Lily (Gallifords Orchid) bought home some rosettes too so I’m definitely feeling inspired to go out and do some more.

Although it is quieter competition wise here, there are still 11 horses in, so it’s keeping us busy enough. I’m truly lucky to have such dedicated staff that I’m not completely alone over the Christmas period. I’m incredibly grateful to them for that, and as they are happy to do the afternoon shift, it gives me the opportunity of going to see my family who are not local, after mucking out and riding on Christmas Day.

On a side note, I was so pleased that AP McCoy was given the Sports Personality of the Year lifetime achievement award. A highlight of my equestrian life, when working in the racing industry years ago was leading him up at the races where he treated me with a lot of respect and ever since I’ve thought what a top man and inspirational personality he is.

With Christmas just days away, I hope it brings every one of you happiness, peace and goodwill…not to mention plenty of grub and drink. Love to one and all,