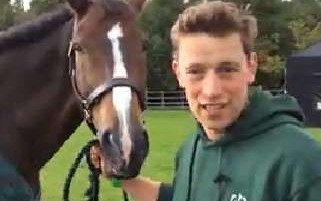 So this morning I was nursing a terrible hangover after the Land Rover Burghley Horse Trials cocktail party. We were dancing on the tables and swinging from the chandeliers.

Only joking! I promise I was on my best behaviour and we had a very regal time, positioned by the kitchen so we got first dibs on the truly gorgeous canapés as they were despatched. It’s a real honour to be invited to the house — it is as beautiful on the inside as it is outside.

In reality, I woke bright-eyed and bushy-tailed, very much like my steed Boz (Cornacrew) who had a canter up the gallop this morning followed by a good jump where he was on springs.

He knows what’s coming and is behaving like he has been plugged into the mains, so he is fully charged and I can assure you he is raring to go. I just hope he won’t fight me too much early on due to being fresh and tire himself out. He’s a strong horse at the best of times which is also energy sapping.

I then walked the course again. I like it. Of course there are fences where I think “b’Jesus that’s massive” and “how the hell will they read that?” but as a general rule I’m confident that Bozzie will love it and really enjoy himself — which at the end of it all is why we are here.

In the morning I will walk the course with Jeanette Brakewell and totally finalise where I’m going. I may watch pathfinder Oliver Townend go round, but I’m not a big fan of watching as everyone is different and Bozzie does have his own way of doing things sometimes, which I know and understand.

I’m looking forward to it and to letting you know how it goes. You never know, we could fly into the lead by tomorrow night! Seriously, I just hope my boy really enjoys himself — it’s what he deserves.