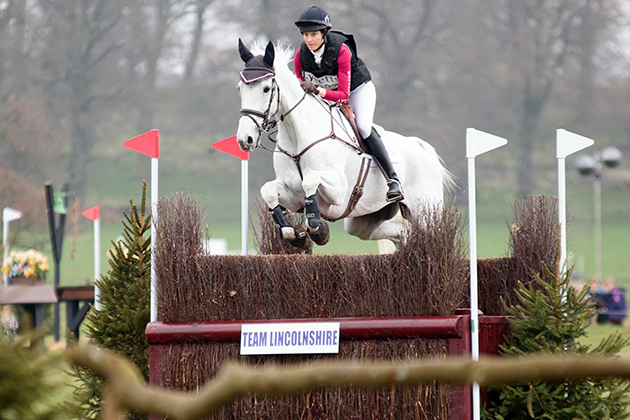 So, it is 25 degrees and I am sat outside writing — can it get any better? Although we have missed out spring, I really do adore sun.

Belton Horse Trials was equally sunny for our dressage test on the Saturday — how amazing, it definitely helps you to be more motivated.

Bouncer (Cossan Lad) did a nice test for him although there were a range in marks from both judges. That’s ok, I suppose as everyone’s in the same boat. Sunday saw a rather keen Bouncer! He showjumped brilliantly however we had an unlucky rail at the second last. He felt a bit onward bound, so I used a tight turn to the oxer not quite giving him enough room and he had it down. We also lost a shoe in the showjumping at fence three. I am lucky he is so sure footed so Helen went for a run to find the shoe quickly then we saw the farrier and then we were on our way to the cross-country.

Bouncer in the showjumping at Belton

The advanced course had been causing all sorts of problems and some big names were having faults. I came out the start box a bit rusty and had all intentions of pulling up after fence 14, as I thought I wouldn’t need to run round the whole course. However, while I was pulling in to fence four I made a mistake and went down on five strides instead of four. That then made me fall short at fence 6b and we had a cheeky run out as I didn’t quite make the distance. It was a good mistake to make — I kicked myself as Bouncer didn’t deserve that, but I then completed the course well and stopped pulling and made the rest easy. Thank you to Helen Bates and Amy Burbage — they were super grooms.

Bouncer on the cross-country at Belton

Bouncer had a day off on Sunday although I didn’t. I met the lovely Emma from Redmills horse feeds and we discussed some exciting plans for Badminton.

Bouncer on the cross-country at Belton

On Tuesday we had a light schooling day and then on Wednesday I finally managed to have a canter on grass. Finally all the horses got to go out in the fields too. I like mine to go out as much as possible as I think it’s good for them to just be horses. We also had the lovely Izzy Nowicki come and give us all a sports massage. She has been training over the winter and will be fully qualified by the end of the year — I highly recommend her. I have been the guinea pig which I haven’t complained about as Izzy has really helped keep me in top condition. I suffer with my back a lot as I am quite tall and I tend to not always engage the right muscles.

Thursday was a dressage day ready for Kelsall Hill on Saturday where, as I write this before our performance, we plan to have a quite run around the open intermediate and hopefully then he will be ready for a relatively easy week before Badminton. I can’t quite believe how quickly it has come along. I will start packing now so that I have a week to find things we need. I also have an outing now at Aston-le-Walls as we were meant to be at Whitfield on Wednesday but that has already been abandoned.

I will keep you updated soon on our Kelsall Hill and Aston adventure.
Kirsty and Bouncer