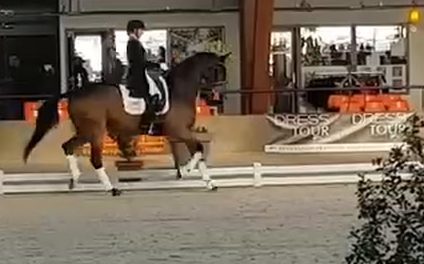 We travelled down to Le Mans CDI via the ferry at Dover to Calais. It took us about 12 hours to get there. Every time we stop, like before and after getting on/off the ferry and at petrol stations, I open up the partitions in the lorry to allow Apollo to stretch his neck and have water and a feed. He’s a super traveller and will eat and drink happily — his favourites are Baileys fibre nuggets, which can honestly get anything to eat as horses LOVE them, not forgetting apple bobbing too. I also get him to do some carrot stretches. This just makes sure he’s still feeling fully flexible and doesn’t get uptight and stiff.

Apollo stretching in the lorry

Once there, he settled into his stable with a huge bed of shavings. The showground was small which is nice as it meant not too much walking! Luckily my dad comes with us to drive the lorry so I can rely on him to carry multiple things back and forth for me.

The trot-up was the following day, which Apollo sailed through. Trot-ups aren’t my favourite thing as it always seems slightly chaotic, but this one was super quick and smooth. I then got to ride in the main arena in my set time and was nearly on my own save for one other who was only walking. This was super as it meant I could really work Apollo and get him used to the scary aspects of the arena without having to dodge oncoming horses.

Friday was a day off for us, so we had a cowboy gallop round the big outdoor arenas and browsed the amazing on-site shops.

Saturday brought the Inter 2 first thing in the morning. This was my first winter CDI too, but it was actually warmer than some I’ve been to in April! Luckily it was indoors too.

Apollo warmed up well and then it was show time; I was last to go. He did a super sweet clear round for 67.7%, which I was thrilled with! Mum even had to whip out the Kleenex tissues she was so proud. We lacked power in our piaffe and passage work, but everything was smooth. For my first international under-25 CDI, I just wanted an easy way round and to build confidence. I was chuffed with a second place too (video top from the prize-giving)!

Sunday was again an early start, with me in first this time. I tried for more power in the trot work resulting in better piaffe, but a few mistakes crept in which kept the mark down on a 66%. The under-25 grand prix test is so fiddly and difficult though, so I was again over the moon to finish in second!

Apollo and I with our second-placed rosette

It was then the usual mad dash to get packed and home. Overall it was a really fun, enjoyable show and I would love to go back for the February show.

Back home, we had an easy week settling back into the winter yard routine. However, the weather continues to throw things at us and the musical rug dance carries on. Our three-year-olds are now turned out again for winter. I think it’s important to let young horses just be horses and not over push them. They won’t work again until next spring.

Joanna has some sad news to share this week, but she’s trying to keep her spirits up

After a recovery week, it was back to the arena for Apollo. We competed our first grand prix freestyle at the Bury Farm gala evening. My music was made for me by Equidance, and features 80’s tunes. As it was nearly Halloween, my piaffe/passage music was Ghostbusters and canter work Stayin’ Alive! I had so much fun riding it and was amazed to get a 73% and finish in third place behind Gareth Hughes and Louise Bell. The judges loved the music and complex floor plan too, but I think during winter training I can make it even more difficult as Apollo progresses.

That’s all from me for now, I’ve had a busy few weeks and a lot more to fill you in on.

Until next time, Joanna x