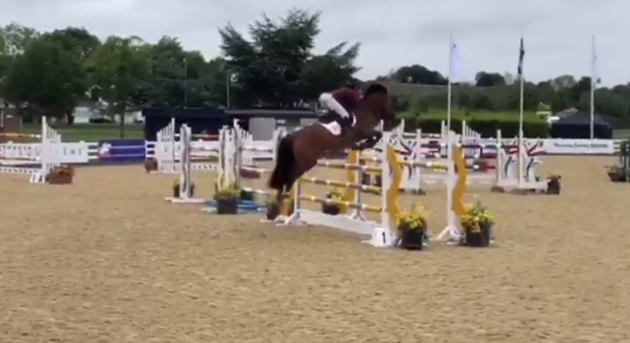 Last weekend we headed to Stoneleigh for the British Showjumping National Championships, where we were for three days.

This show is lovely to go to as, due to all the classes being national, it feels a little more relaxed than some of the shows we have been to recently.

That being said, I was still kept very busy as we had a host of horses onboard with us, including a lot of the younger Z7 horses.

For five-year-old BE Reverant, this was his first away show and the biggest he has jumped at any show, so I was really excited that he did a double clear in the newcomers and again in the five-year-old championships to finish fourth.

I had three seven-year-olds with me; Z7 Canya Dance gave me my win of the week with a fantastic round on the first day in the 1.30m. The other two; Z7 Diamond and Z7 Caretina both ran in the big HOYS (Horse of the Year Show) classes on the first two days, which was a massive step up for both of them as these classes were big with tricky courses. With this in mind, I was pleased with both of them, having one down on the first day, and Diamond giving a super clear on the second day. The crowning moment for Caretina though was the under-21 Championships where she finished fifth in a very competitive class. You can see in my video the winner of this class, Oli Fletcher, chatting a little about how he found the show.

Coquette Chapotiere, a six-year-old, jumped the foxhunters and age classes, again a step up for him.

Among all the youngsters was seasoned pro and 18-year-old Crispen, who had a little making up to do after he gave me a less then perfect round at Hickstead a couple of weeks ago. But redeem himself he did, jumping all the HOYS classes beautifully and placing on the second day.

This is a part of my job that I love the most; getting the opportunity to ride these young horses as they advance through the levels. Although we only had a few placings, this show was a big test for all the horses, particularly the seven-year-olds, and they all really showed their progress.

I’m extremely lucky to have this really talented string of horses to ride, and the young ones really proved that at this show. At the moment we are riding the courses as a learning curb for them before they can be competitive at the this higher level, but I’m really excited about what is to come and believe next year they will all be able to step up and contend the top placings.

Another perk of what I do is that I am always surrounded by my friends when I go to competitions. In my video you can see both Oli Fletcher and Miles O’Donnell chatting about how they found the show. It’s a strange world for us riders, as the people you friends with tend to be the people you have to be most competitive with!