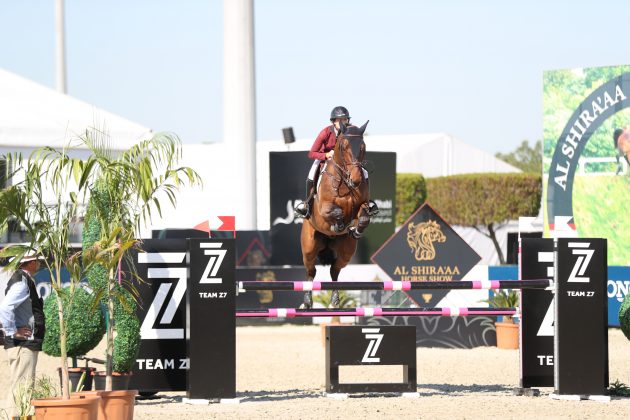 Last week I got to spend my time competing at my favourite show — the Royal International Horse Show at Hickstead. Being lucky enough to be based at Breen Equestrian, I can practically roll out of my bed and land in the main arena, so it makes a really nice change to not have to pack up the lorry and travel for hours to get to a venue.

Hickstead is always great to go to as not only do they host some of the best classes in showjumping, but they have a number of other rings that have classes from British Novice all the way through to 1.40m. While this is amazing, as it means we can give the young horses the chance to experience a busy show and have time in a competition arena, it does make for a very busy week, flying on and off horses to make sure we jump as many as we can!

This show was special to me for a whole new reason this year, as I got to jump in my first five-star class with Z7 Cash Up and Z7 Cordanos.

Although I was obviously so excited to be taking this step, I would be lying if I said I wasn’t nervous. Not only was it our first attempt at the level, but we were jumping in the King George V Cup, which is one of heck of a class to start at and to be part of.

I jumped Cash Up early on in the week and he was feeling good, so I knew I had him on my side. Shane Breen walked the course with me and talked me through every stride and jump. I have to admit only two things went through my mind before I went in; very big and very scary. Having a mentor like Shane is always such a help at these things, not only did he coach me through it but he helped build my confidence right up until I needed to enter the ring.

Georgia reports back from the Young Rider European Showjumping Championships, where she had the time of her life

Cash Up was amazing. We got through a lot of the more testing combinations that seemed to catch a lot of riders out with no problems. Flying over the water jump was a bit of a close shave, but by the time we had got through the double of gates the judges ruled that we had cleared it. At the end of the round we finished with nine faults — two poles down and one time-fault, which I couldn’t be happier with.

Hopefully now I will get a lot more opportunities at these bigger shows and another chance to tackle a five-star grand prix.

Next for us is the four-star show, Valence, in the South of France, so we’re back to packing up the lorry and hitting the road!