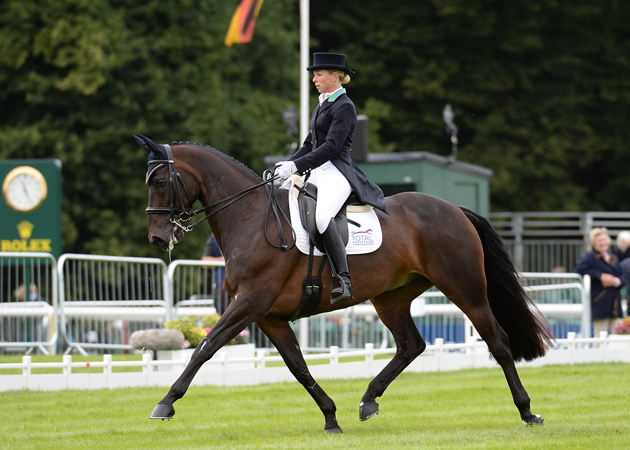 I’m disappointed after the dressage but I’m sort of over it now and thinking positively about tomorrow as I don’t for a moment think this year’s Land Rover Burghley Horse Trials will be a dressage competition.

We scored 51.7 and are lying in 45th position at the moment.

I’ve watched the video back and its such a shame he went so tense on me as he’s been so lovely all week and in our build up. I had to ride defensively to get through the test rather than push for the really big marks. He was so sharp that had I not been on the ball he would have whipped round with me at the bottom corner.

Burghley does seem to rattle a few cages and there arre a lot of horses there who were affected by the big atmosphere and didn’t perform as they usually do.

I think Luhmühlen is far more spooky but it doesn’t seem to affect horses as much and he went beautifully there.

It does help to be up there after the dressage, but I’m not far out of the mix and we’re in the top half, rather than the top 15 where I’d hoped to be.

Lucinda Green rightly said to me after that I’d probably want him to be sharp and fresh for tomorrow. She’s always knows when to say exactly the right thing and hearing that was a huge help as she is so right!

Our preparation beforehand went very smoothly apart from the fact he was a little toerag after his pre-show bath. I took him for a graze and when he thought I wasn’t paying him any attention, he got straight down and had another roll so he had to have his knees and hocks washed again.

After lunch I walked the course again with friends and family. I have more of a plan in mind and in the morning I’ll walk it again and make sure I know where all my minute markers are.

I did a little bit of shopping with my mum, Crystal, straight after the course walk although I didn’t have my wallet on me which is probably a good thing!

It’s lovely having my friends and family here with me and tonight we’ll be very relaxed. I’ll eat plenty of carbohydrates and then try and get a restful night’s sleep – no going over the cross-country course in my mind I hope!

My dad Steve’s company Total Equestrian Construction is my main sponsor and in my eyes he’s just wonderful. He’s so supportive and knows just when to give advice and when not to. Thank you, dad!