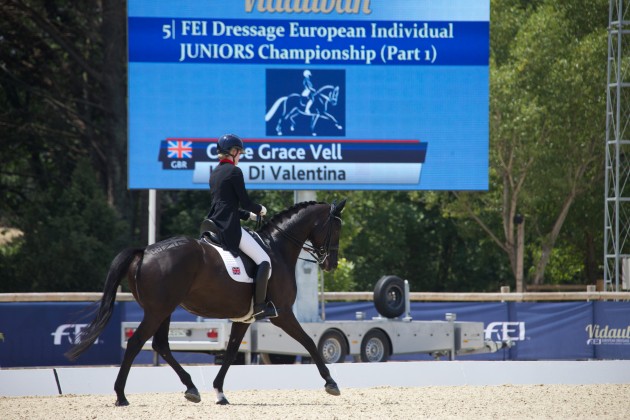 At home I have been working towards the start of this season’s major domestic competitions starting with Myerscough Premier League where I will be competing Kaja. She is new to Prix St Georges (PSG) level but is proving to be so talented. We will also hopefully take Humus out for the first time too.

Humus having a snooze

As a five-year-old stallion it will be interesting to see how he and I cope with the challenges of a competition environment. My thanks go to his owner Marleen Smith for the opportunity. One thing is for certain, regardless of the result we will learn a lot about each other.

Dressage judging has once again hit the headlines over controversy in the recent Moscow Olympic qualifier. It will be ever thus. At every level of dressage from the smallest local show to Olympic finals every rider in the sport will at some point have looked at their score board, read their score sheet and pondered the correctness of their result, the particular likes and dislikes of a certain judge, the training or purchase connections between a judge and rider, a political or selection agenda and have probably felt they have benefitted or been penalised from any of the above. A straight face, a knowing look to friends and team and a brisk walk back to the lorry for a “chat” is a well-repeated routine.

Hopefully judge training and systems will be constantly under review as the commitment of every horse and rider that enters an arena, regardless of the level, merits the pursuit of judging excellence. As riders we have to accept that while we hope for the highest level of objectivity, we compete in a sport that will always have a degree of subjectivity — sometimes it feels like a friend and sometimes our enemy.

Shortly after Myerscough I will be hosting a dressage to music event with Gaynor Colbourn, a fantastic composer and rider as seen at British Dressage national championships. It will hopefully bring together local riders from Pony Club level through to seniors at PSG level, local ponies to European team horses. We will be creating new routines with live music for each individual at the clinic and showcasing performances in an evening demonstration with home-made food (not by me!). I love dressage to music and think it’s a perfect way to start dressage with a chance to be unique and show off your best bits to the judges.