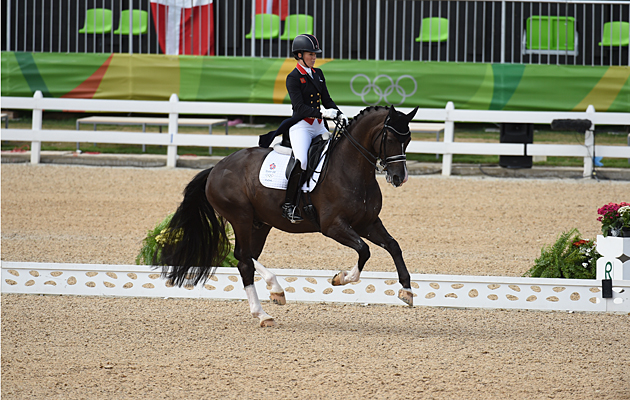 Britain’s dressage team holds the team silver medal position after the grand prix at the Rio Olympics. Final rider Charlotte Dujardin put in a brilliant test with Valegro this afternoon to score 85.071%.

“I just wanted to go out there and enjoy myself,” she said after her test. “I watched a lot of people yesterday going in there looking very white and nervous, so going in there today was all about going in and enjoying it.”

Her score rockets Britain into silver at the half-way point of the team competition, which concludes after the grand prix special tomorrow (Friday, 12 August).

Charlotte Dujardin and Valegro (GBR) at the Rio Olympics

Charlotte also sits atop the leaderboard individually, chased by three German riders all with scores over 80%.

“I was smiling out there before I even went in; I can’t help but smile when I ride Valegro because I think something and he does it and I laugh and think, ‘How does he know? I didn’t even I ask; I just thought it.’

“Now we’ve all been in the arena once and some of us will be better [tomorrow] I think,” added Charlotte, who holds the grand prix world record of 87.460% (set at Olympia in 2014). “Fiona and Spencer did fantastic jobs. And Carl, not only has he had to ride himslef, but he’s been the rock for all the rest of us. He’s been training us all and picking us up on down days when we’re moping. I honestly don’t know how he does it.”

“I was really happy with Weihegold; she did a great job,” said the five-time Olympian. “She was a little bit tense; the flags were really rough when I came in as it was quite windy so I was careful as I felt she was reacting [to the surroundings] a bit.”

Isabell Werth and Weihegold OLD (GER) at the Rio Olympics

The top six teams are all through to tomorrow’s grand prix special, as well as the top eight riders not qualified through their team’s participation. This group include Ireland’s Judy Reynolds and her Jazz gelding Vancouver K.