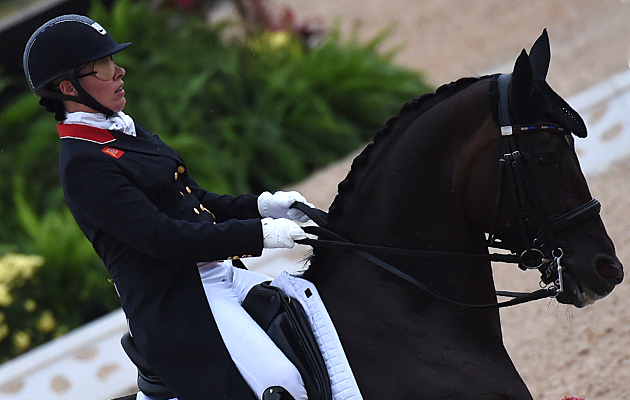 According to the Rio 2016 official results, the British dressage team lie in bronze medal position after the first half of the grand prix. However, due to the Dutch rider Adelinde Cornelissen’s early departure from the competition with Parzival after he was bitten on the face and had a toxic reaction, they only have one score on the board, that of Edward Gal and Voice (75.271%).

Fiona Bigwood on Orthilia at the Rio Olympics. Picture by Peter Nixon

The results are calculated using average scores, so the Netherlands’ average is showing as Edward’s 75.271% score. The reality is that Britain is in a stronger position that the Netherlands as Spencer Wilton’s score will hopefully become the drop score. But there is some way to go, as the final team medals are decided on the results from both the grand prix and the special tests. The three best riders’ scores from each nation count.

The first two British riders out of the blocks have put solid plus-70% scores on the board.

Fiona Bigwood and Orthilia’s score underwent a number of amendments, showing at one point as 77.4%, but the final, official result is 77.157%. Spencer scored 72.686% this morning with Super Nova II.

“I’m over the moon,” said Fiona, who was wearing an eye patch to help with the double vision she suffers from after falling off in April 2014. “Carl Hester has been absolutely amazing training us and helping us prepare for this.”
“Tillie was so listening to me from the moment I got on.”
The German team are in pole position after two assured performances.

Rookie rider Sönke Rothenberger and his inexperienced horse Cosmo 59 rode an inspired round for 77.329%, while his compatriot Dorothee Schneider’s performance on the Sandro Hit son Showtime FRH was rewarded with 80.986%, putting the London 2012 silver medal winning nation very much at the head of things in Rio.