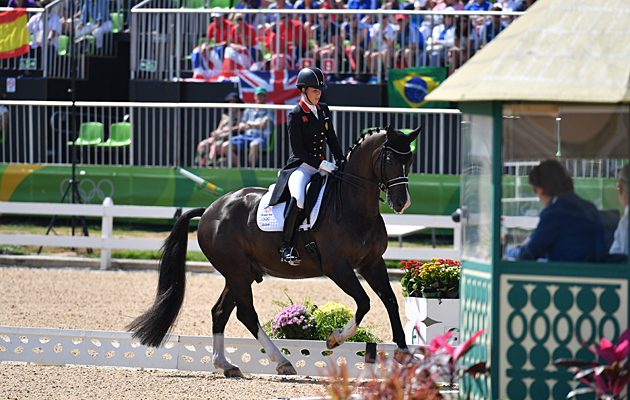 Charlotte Dujardin successfully defended her Olympic individual title in Rio today, clinching the gold with a massive 93.857% on Valegro.

The rider was in tears as she left the arena and broke down again talking to journalists afterwards.

“I just knew he couldn’t have done any more,” she said. “I felt like he’d done his very best and I’m very emotional, particularly because I think he’s going to be retired. I don’t want you to write this because we haven’t said when, but it’s on the cards to retire him, so we’ll go home and make a plan.”

Charlotte said it felt like the 14-year-old knew she was emotional today.

“I feel like he really looked after me and helped me,” she said.

Germany’s riders took both the other medals, with silver for Isabell Werth and Weihegold OLD on 89.071%. Krstina Broring-Sprehe claimed individual bronze with Desperados FRH on a score of 87.142%.

Britain had two other riders in the freestyle, Carl Hester and Fiona Bigwood.

Carl was delighted with his performance on Nip Tuck, who scored 82.553% for seventh.

“It felt beautiful and I felt my mark matched my test, which is nice and not always the case,” he said. “I came out and thought, ‘What more could he have done?’ He’s improved each day.”

Fiona broke into canter twice in her test with Orthilia, in the first trot half-pass and on the final centreline, ending up with a score of 76.018%. She explained that with temperatures hitting the 30s today, her preparation had not been ideal.

“It was a tough warm-up today — we went in the air-conditioned indoor, but there’s no atmosphere in there, so then you come out and they are suddenly exposed to the atmosphere,” said Fiona. “But it’s too hot to warm up outside.”

Judy Reynolds, the first Irish rider to qualify for the Olympic freestyle, completed her Games with a score of 75.696% and 18th place on Vancouver K. She was a little disappointed to have a couple of mistakes in her test today, but delighted with her Olympic debut as a whole.

Full 20-page report on the dressage from Rio in H&H this week, out Thursday 18 August, including full analysis of how the medals were won and comment from Richard Davison and Peter Storr.
0 Videos