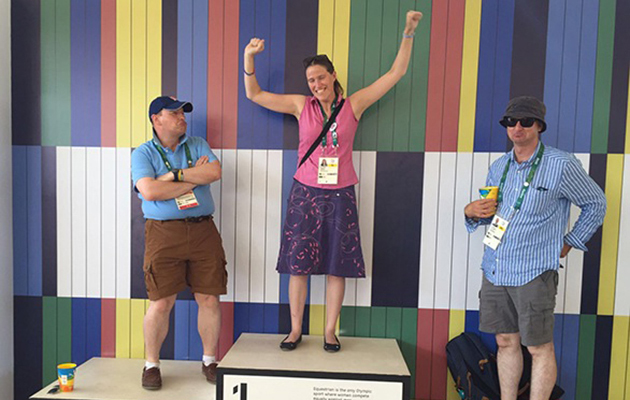 So, dear readers, the Olympics is continuing, the showjumping has started, the dressage finishes today, we are well over halfway through our stay here in Rio.

On Saturday, we had a day off. There was no equestrian competition, so we decided to take the opportunity to check out some of the other Games venues and soak up some atmosphere.

First stop was the fanzone in Deodoro, at the venue where a number of other sports are being held. The FEI (international equestrian federation) has a big stand here where people can learn more about the equestrian disciplines at the Games, so we headed there and availed ourselves of all the FEI fun on offer.

My husband, Olympic commentator John Kyle, shows off the fun opportunities available at the FEI stand

I took on the obstacle course (video above — sometimes I worry about the things I do for H&H…) and crowed about my victory over my husband (Olympic commentator John Kyle) in silver and H&H photographer Peter Nixon in bronze.

John Kyle, Pippa Roome and Peter Nixon on the podium in the FEI stand at the Deodoro fanzone

We hung out in front of the big screen here at the fanzone for a bit, but oddly, after the brief flash of sport shown in the photo below, it seemed to turn into a music concert, with a group singing on the stage and that being shown on the screen to the left too, which was a bit disappointing when Usain Bolt was running in the main stadium.

The big screen and stage at the Deodoro fanzone

So we headed on down to Barra, to one of the big Olympic clusters where the venues for sports such as tennis and swimming are located.

Tennis stadium at the Olympic Park

As the evening drew on, it was a fun place to be — there were a lot of people having drinks, eating, swapping the beer cups showing different sports, queuing up for the giant merchandise stand and just generally enjoying the atmosphere.

Looking across the Olympic Park to the giant merchandise shop

It was wonderful to see so many people — the equestrian venue hasn’t had a lot of spectators (though that changed yesterday with a massive crowd for the first day of showjumping) and it actually felt like we were at a big show.

Again, it was a little strange that none of the big screens at Barra were showing any sport (people taking part in a crowd freestyle football competition doesn’t count). I had assumed that hanging out at a fanzone would be much like sitting on Henman Hill (or is it Murray Mount now?) at Wimbledon — a way to watch the action without actually having a ticket to go into a venue, but with a great atmosphere and the sense of being “on the spot”. But that wasn’t the case.

I’m not sure if this is a deliberate strategy to make sure people have to buy tickets if they actually want to see the Olympics, but it seems like a shame.

Anyway, back at Deodoro we have all our fingers crossed for Charlotte Dujardin today — let’s hope she can bring home Britain’s first equestrian gold of the Games. Make sure you follow here.