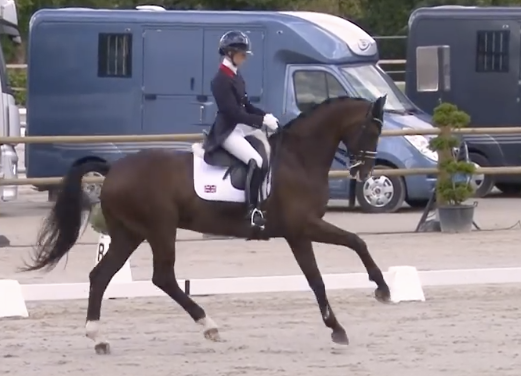 Britain’s Charlotte Fry showed herself to be a serious hope for future senior teams when she was crowned European champion at the under-25 European dressage championships in Exloo, The Netherlands.

Having led the British team, also featuring Ryan Todd, Becky Edwards and Claire Gallimore, to a historic bronze medal at these relatively new championships, Charlotte, known as Lottie, went on to add an individual silver and freestyle gold to her collection.

Riding her own and the Van Olsts’ Zucchero gelding Dark Legend, Lottie finished second by just 0.7% in the individual under-25 grand prix, behind Germany’s Jill-Marielle Becks and Damon’s Satellite, but went one better in the following day’s grand prix kür, scoring a whopping personal best of 82.15% to claim gold with a margin of 3%.

“I never expected to win the gold — we joked about it, but never thought it would actually happen,” said Lottie.

Her freestyle test, set to a modern Tom Hunt compilation of instrumental Coldplay and the Chainsmokers tracks, featured piaffe pirouettes, an attractive canter zig-zag and bold, espressive extensions. Lottie and ‘Darky’ received a total of 17 nines — across nine of the 21 marking categories — with not a single mark below a seven. All the judges bar one rewarding her with more than 82%, with just Spain’s Francisco Guerra Diaz at E marking her below the 80% threshold.

“There was no one highlight — the whole test was a highlight. Nothing could have been better on the day; it was a perfect test for him — he gave me everything,” said Lottie, who says Darky’s strengths are his trot half-passes and canter pirouettes, both of which earned nines for the judges.

The German rider took home team and individual gold medals at the European Reining Championships, held on her mother's ranch

The pair are in their first year of grand prix, and made their senior debut at the level at Compiegne CDI3* in May, before going on to finish third in the grand prix freestyle at Bolesworth in June, behind Olympians Carl Hester and Richard Davison.

Don’t miss this week’s issue of H&H with a full report from the Under-25 European Championships, out on Thursday 23 August