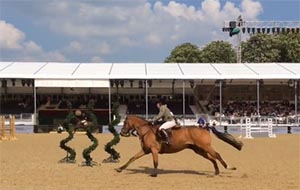 The VWH won the WHMG inter-hunt knockout competition in a hotly contested final against last year’s winners the Bicester with Whaddon Chase at Royal Windsor Horse Show yesterday (Thursday 12 May).

Lining up first for the victorious team – that secured a valuable £1,000 cheque for hunt funds – was eventer Tintin Belsham, who set a great pace on Billy. Scarlett Crew riding Valentino, her fiancé and former point-to-point rider Tim Howse (Pod) and farrier Simon Watkins on his cracking grey hunter Joey, completed the line-up that won in 108.31 seconds, the quickest round of the day.

The Bicester were favourites to retain their crown after securing the fastest times in each of the three previous rounds, however accuracy proved to be the key when it really mattered for the VWH. The two teams came across the line in almost an identical time, however the VWH had fewer fences down and incurred less time penalties so claimed the victory.

“The horses were all fantastic and did us proud,” explained VWH team stalwart Scarlett Crew, who was also a member of the winning team at Windsor in 2013. “This is probably my last relay competition this year though because I’m going to do some field mastering next season so want to give my horse a break now before we start hunting again.”

The result might have been different had the stewards’ enquiry in the first of the semi-finals not gone in the VWH’s favour. Following the first handover, the VWH’s Scarlett Crew was carried out at the first fence by a rider from the Cotswold and lost valuable time. However the Cotswold were awarded a time penalty by judge Nigel Peel MFH for this unintentional interference, leaving the VWH as the winners and securing their place in the final.

Third place went to the Kimblewick Hunt, who just missed out to their neighbours the Bicester in the semis, with the Cotswold taking fourth following their clash with the VWH. The Royal Artillery were awarded the prize for the best turned out team.

Ever the crowd pleaser, the competition was not without its thrills and spills. There were some dramatic rider falls – all without injury – for competitors from some of the 16 hunt teams that took part, competing head-to-head over a mirror-image course in the Castle Arena.