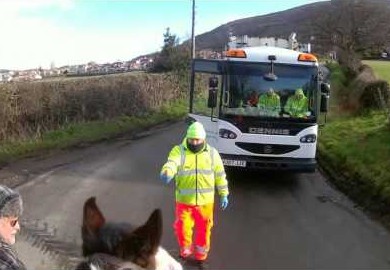 A touching video of a bin man helping a spooked horse in Wales has gone viral on the internet.

Erin Connor was riding her five-year-old horse, Patch, on a country lane in Dyserth, Denbighshire, on 21 February.

A refuse lorry approached and Patch stopped in the road. The lorry then stopped and reversed away from the pair.

The two ponies have now been rehomed as companions

“Patch was still quite nervous,” Erin told H&H. “A man came over and helped me past and I was really thankful.

“Then a bin man came out of the lorry and gave Patch a carrot. It was such a nice thing to do.

“I was so touched that I felt it needed to be shared on social media and I have been overwhelmed by the response”.

Once Patch had passed safely, the lorry continued on its rounds.

The refuse worker who acted so considerately towards Erin and Patch was John Shone.

“We were delighted to have this footage brought to our attention,” said Jim Espley of Denbighshire County Council.

“Our refuse collectors come across all kinds of situations in their day to day duties and are often seen travelling along narrow roads.

“John has shown a real act of kindness in this situation and we are delighted that it has generated such interest on social media”.

Erin, who has owned Patch for a year, was wearing a hat camera that captured the footage.

Patch has been nervous of larger vehicles in the past and Erin said this experience will help him in future.