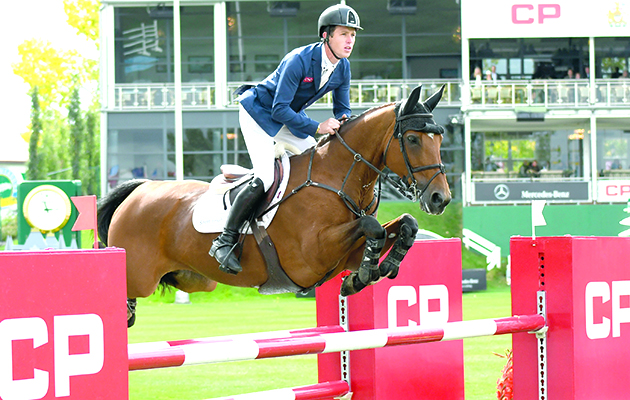 Ursula XII will officially be retired from competition at Olympia, the London International Horse Show (17-23 December) it has been confirmed.

The 17-year-old mare’s retirement ceremony will take place after the grand prix on Sunday.

Scott announced Ursula’s retirement after they finished sixth in the Rolex Grand Prix at the CHI Geneva, Switzerland on 9 December.

“Ursula is once-in-a-lifetime horse who has given me moments in my career that I will never be able to top,” said Scott. “I don’t think I will ever ride a horse like her again, she’s one of the smallest horses in the stables but jumps round such big courses more easily than any horse I’ve ridden.”

Scott said it was an honour to be celebrating the Scottish sport horse’s “incredible” career and giving the mare the retirement ceremony she “deserves”.

“We’re thrilled to be paying tribute to her at Olympia, the atmosphere is like no other and the show is on home-turf, making it even more special,” he said.

Scott and Ursula, owned by Lady Harris and Lady Kirkham, have been one the world’s greatest pairings since forming their partnership in 2012. The partnership has regularly competed at Olympia, narrowly missing out on winning the Longines FEI Jumping World Cup in 2017 to Julien Epaillard in the jump-off. The pair’s achievements include winning the CP International at the Spruce Meadows Masters in 2016, the Longines Global Champions Tour (LGCT) grand prix in Doha in 2017, and the LGCT grand prix in Mexico this year.

Scott Brash bids an emotional farewell to the outstanding mare, who helped him to win one of the most prestigious

To celebrate Ursula’s outstanding career, we’ve picked out six epic moments that helped her to become the best horse in

Show director Simon Brooks-Ward said: “We’re delighted to be holding the official retirement for Ursula. She’s an incredible horse and it is a privilege to be paying respects to her career, in addition to giving ticket holders the opportunity to witness this special occasion.

Following retirement, Ursula will return home to Scott’s stables. He hopes to put her in foal next year and said he thinks she will make a “really good mother”.

Tickets for Olympia are still available at www.olympiahorseshow.com.