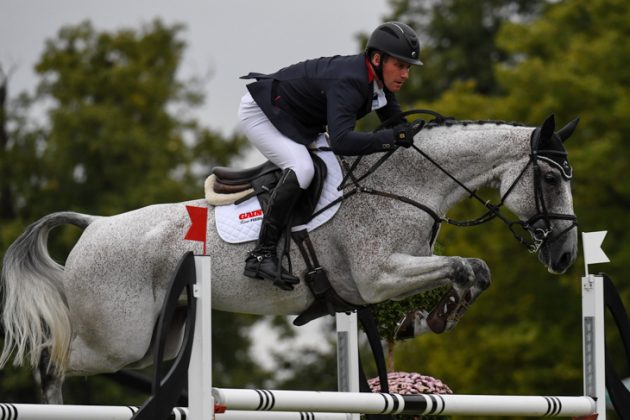 This year’s Land Rover Burghley Horse Trials went down to the wire in the final showjumping phase today (3 September). But Oliver Townend clung onto the lead to take the prestigious four-star title aboard the exciting 10-year-old Ballaghmor Class, owned by Karyn Shuter, Angela Hislop and Val Ryan.

“It’s very special. I’ve had him from the word go and he’s a top class horse,” said Oliver, who last won here in 2009 on Carousel Quest. “I was walking him around the collecting ring when I was warming up and I thought, whatever happens, I wouldn’t swap him for any other horse here.”

Oliver had one fence down and a time-fault but it was enough to seal the win by 1.3 penalties on a horse who hasn’t always been the most straightforward.

Second place went to Piggy French who jumped a clear round to rise from fifth on Vanir Kamira, a 12-year-old mare owned by Trevor Dickens.

“It’s amazing, isn’t it. She’s been such a good girl. It hasn’t sunk in,” beamed Piggy, who has made a very strong comeback after having a baby last year. “It’s amazing what difference a year makes and it’s great to be back. It might not have been the prettiest of rounds, but she really tried and left all the poles up.”

Gemma Tattersall and Arctic Soul had one fence down, dropping them from second to third.

“A stupid touch at the third cost us, but I’m I’m still third at Burghley and he’s still an incredible horse,” said Gemma.

“He’s a special horse. He jumped super and is very consistent,” said Tom. “I’m so happy with him.”

New Zealand’s Tim Price completed the top five on Ringwood Sky Boy. The pair had a fence down and a time-fault, which dropped them one place.

Tina Cook was the only rider to finish on their dressage score. She was seventh on Star Witness, who is owned by Jim Chomiak, Bridget Biddlecombe, Shaun Lawson and Nicholas Embiricos.

“I’m so pleased with him as he’s fairly shocking at one-days,” explained Tina. “But he tries his socks off in this phase and I’m so pleased.”

Izzy Taylor dropped from third to ninth after three fences down with Trevidden.

“Obviously I’m disappointed — he just went a bit green in there,” said Izzy. “But I couldn’t be happier with him for his first attempt at a four-star.”

Take a look around the course to see

Andrew Nicholson slipped two places to eighth on Nereo after he had two fences down and two time-faults after the 17-year-old struggled some tricky distances.

Don’t miss next week’s issue of Horse & Hound magazine, out on 7 September, for full analysis and reports from Burghley
0 Videos